Wall Street brokerages predict that BJ’s Wholesale Club Holdings, Inc. (NYSE:BJ) will report sales of $4.40 billion for the current fiscal quarter, according to Zacks Investment Research. Five analysts have provided estimates for BJ’s Wholesale Club’s earnings, with the lowest sales estimate coming in at $4.19 billion and the highest estimate coming in at $4.58 billion. BJ’s Wholesale Club reported sales of $3.95 billion in the same quarter last year, which indicates a positive year over year growth rate of 11.4%. The company is scheduled to report its next quarterly earnings results on Thursday, March 3rd.

On average, analysts expect that BJ’s Wholesale Club will report full-year sales of $16.82 billion for the current fiscal year, with estimates ranging from $16.50 billion to $17.67 billion. For the next financial year, analysts expect that the business will report sales of $17.90 billion, with estimates ranging from $17.39 billion to $18.66 billion. Zacks’ sales averages are an average based on a survey of sell-side research analysts that cover BJ’s Wholesale Club.

Featured Article: Penny Stocks, What You Need To Know 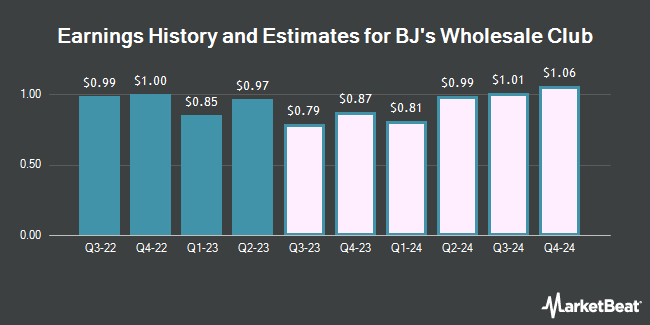 Should you invest $1,000 in BJ’s Wholesale Club right now?

Before you consider BJ’s Wholesale Club, you’ll want to hear this.

MarketBeat keeps track of Wall Street’s top-rated and best performing research analysts and the stocks they recommend to their clients on a daily basis. MarketBeat has identified the five stocks that top analysts are quietly whispering to their clients to buy now before the broader market catches on… and BJ’s Wholesale Club wasn’t on the list.

While BJ’s Wholesale Club currently has a “Hold” rating among analysts, top-rated analysts believe these five stocks are better buys.

Is Townsquare Media (NYSE:TSQ) a Good Stock to Buy?

Why Is Ocugen (OCGN) Stock Up Today?

The Stock Market Is Showing A Decline This Morning, But Many Penny Stocks Have…

Which is the Best Discount Retailer for a Recession?

Is The SPY Headed For Another Bull Cycle In This Bear Market: Here’s A Look…

Sep 29, 2022
Today the usual initial and continuing weekly jobless claims data is due out, as well as gross domestic product…

Sep 29, 2022
Stock futures slumped Thursday, putting the major averages on track to give back some of the sharp gains seen in…

Sep 29, 2022
After days of market turmoil and currency volatility since the “fiscal event” of the chancellor, Kwasi Kwarteng,…
Prev Next 1 of 2,063
Sign in / Join
Sign in