It’s been a wild ride for the stock markets this year, and the wildest of them all was the path of growth stocks. Stocks that surged hundreds of percentage points, with investors chasing after them, prepared to pay almost any price – crashed spectacularly, losing all their glamor. These previously sexy and exciting companies crumbled when the economy and stock market weakened, with some of them losing their mojo months before the general markets went crashing down.

Here are 2 Stocks to Consider for a Rebound

From Heroes to Zeroes: These 2 Stocks Can Comeback

Many tech stocks, big and small, have been hammered so much over the last year that investors are wondering if this is a repeat of the dot-com bust of the early 2000s. To tell the truth, there are quite a few similarities, with the most striking being the crazy valuations of the tech stocks that have now been almost completely wiped out.

From Growth to Bubble

These were mostly stocks outside of Big Tech. Although the large-cap tech stocks reached quite high P/Es of 40x to 50x, these weren’t completely unfeasible considering that these are very profitable companies with rich cash flows and valuable market shares – corporations that registered high earnings growth during the 2020-2021 rally. Of course, as the Fed turned course and operational and financing costs started rising, the valuations of Big Tech stocks reflected the negative expected change in net profit; but the path of the large caps is nothing similar to a bubble and burst.

The stocks of smaller, rapidly-growing companies were a very different story: they were trading at price-to-sales ratios of above 30x (P/Es weren’t applicable here as they were mostly unprofitable). Those ratios suggested they were firmly in bubble territory, as no one really believed they would be able to grow their sales as much as to bring them in line with prices. In fact, the bubble was so obvious that many of these stocks peaked months before the Fed’s tightening pivot in November 2021.

Zoom Video (NASDAQ: ZM), Peloton (NASDAQ: PTON), Carvana (NYSE: CVNA), Fiverr (NYSE: FVRR), Shopify (NYSE: SHOP), and others were the pandemic darlings, as, during lockdowns, life continued mostly online. Peloton surged 725% from the pandemic’s low in March to its peak in December 2021 and then lost 95% of its value, trading at a much lower price than before the rally. Another lockdown darling, Zoom, rose 780% up to its high in October 2021, then crashed by about 85%. Carvana rose 1,049% from March 2020 to August 2021, only to drop like a rock by 97%, wiping out all of its gains and more. Fiverr had rallied 1,126% to its peak in February 2021 before it collapsed 91% to its pre-pandemic price of $27. These are just a few examples out of oh so many.

What’s interesting is that those aren’t meme stocks running on hype only but shares of companies selling products and services that people actually like and buy, even if some of them lost some market share that was gained during lockdowns. Many of the companies that are now on the verge of becoming penny stocks are actually doing quite well, cutting costs and holding onto their revenues.

How Did They Fly So High?

The common denominator for these stocks, apart from their spectacular surge and even more spectacular downfall – is that they are all considered growth stocks. As customary for growth stocks, most of these companies are unprofitable but may have the potential to deliver above-average returns over a long-term horizon thanks to investing in the development of innovative products, services, or business models. The years after the Global Financial Crisis (GFC), with low interest rates, low inflation, a bouncy economy, and growing affection for all things innovative, were great for growth – but the COVID-19 pandemic, with all its hardships, was even better. 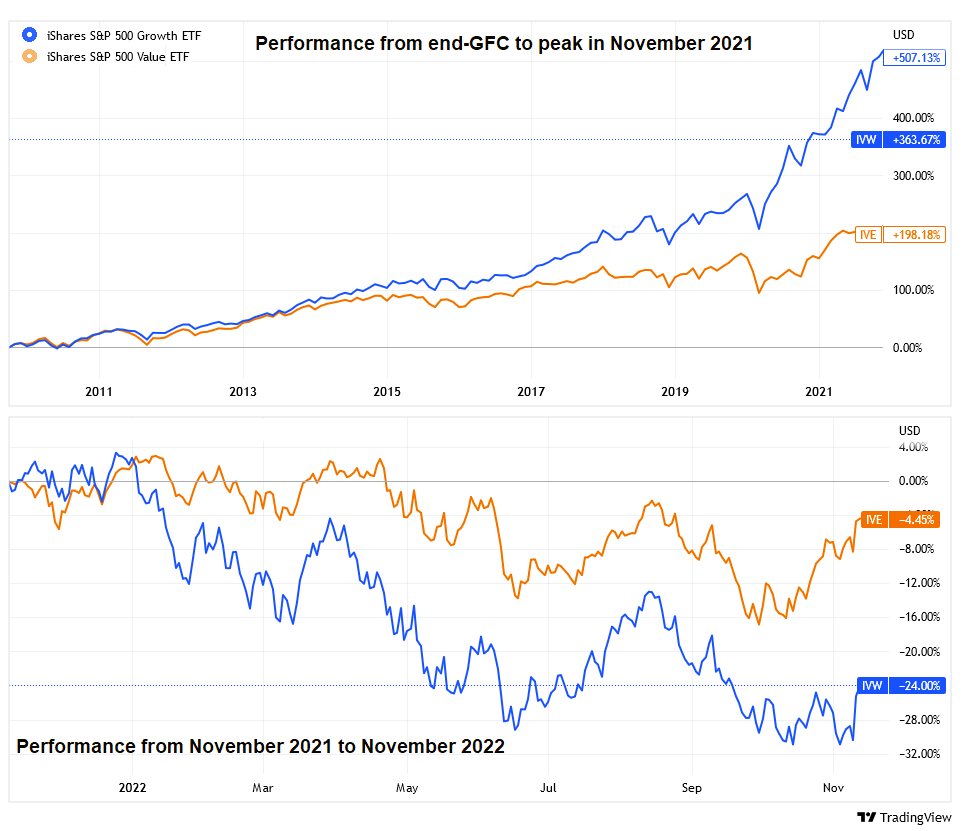 At the onset of the pandemic, the Federal Reserve took extraordinary measures to support financial markets, cutting interest rates to zero and injecting hundreds of billions of dollars into the financial system. The U.S. Congress did its part as well, pumping trillions of dollars into the economy by means of extended unemployment benefits and stimulus checks. With bond yields at historical minimums and savings programs yielding zilch, all this money had nowhere to go but the stock markets.

It is common knowledge that “the stock market is not the economy.” That is, the direction of the stock market doesn’t always reflect what’s happening on Main Street. However, there is one piece of the economy that Wall Street is obsessed about – well, apart from the times when mania du jour takes over: corporate profits, particularly the outlook for profits over a longer horizon. In times like now, when the interest rates are expected to rise until the economy falls into recession and then some more – these future profits aren’t worth much today. When liquidity is scarce, no one in their right mind will pay an outrageous price for a stock in a company that may, or may not, turn in a profit in a few years – if the stars align.

All isn’t over for growth; the tide will turn, and they will likely take over eventually. After all, we are living in a technology-driven, technology-focused, and technology-obsessed civilization; if not for the entrepreneurs with bright ideas and the investors willing to give them a hand, we’d still be riding horse carriages, at best. So, in the long run, Tech will prevail. Meanwhile, it’s in trouble. Well, not in trouble per se: the technological progress and the innovation won’t stop – but non-profitable high-maintenance growth stocks surely are.

Many investors are now looking for bargains in the stock market, specifically among the former high-fliers whose valuations have come down to earth. The problem is that for many traders, “doing research” on a stock means checking its price versus history. When they see that the stock, whose price was at hundreds of dollars, is now selling for a few bucks, they believe that they’ve found a great entry point. However, the price alone can be a very misleading indicator at its highs as well as at its lows.

Those looking at the price only are at risk of falling into a “value trap” when their cheaply bought holdings actually never rebound because they were cheap for a reason. Of course, the low price and low multiples may be caused solely by negative investor sentiment. On the other hand, they may mean the company is experiencing financial instability and has little growth potential, and the stock may continue to languish or drop further. To avoid the trap, it’s advisable to try and discover all the “why’s” of the stock behavior, including researching fundamentals and analyzing business prospects.

For example, Twilio (NYSE: TWLO) may be worth looking at after the massive price crash. Although Twilio’s net profit is negative and expected to be negative for a while more, its customer base and revenue are growing nicely, it has much more cash than its total debt (which is also very low vs. its assets), and it has sufficient cash runway for more than three years based on its current free cash flow. As such, Twilio looks like a solid bargain for a longer-term investment.

Another potential “Buy” may be the Israeli-born Fiverr. The stock has already jumped more than 40% from its low, but considering how low that low was, it’s still very, very cheap. What caused the surge was impressive Q3 results, with revenues and earnings beating estimates by a wide margin. Fiverr’s financial position looks good, as its short-term assets exceed its short- and long-term liabilities, it has more cash than its total debt, and it has sufficient cash runway for more than three years due to free cash flow being positive and growing. Fiverr’s stock isn’t immune from the market’s gyrations, of course, but it does look like a potentially profitable long-term investment.

Check out these 10 Utah holiday markets, where people can ‘shop small’ and find unique