A bit of bad news for Tesla (NASDAQ:TSLA) may have been viewed as good news for fellow electric vehicle maker Rivian Automotive (NASDAQ:RIVN) Tuesday. Tesla announced a recall of nearly 54,000 electric cars and SUVs to fix a problem with their “Full Self Driving” software. 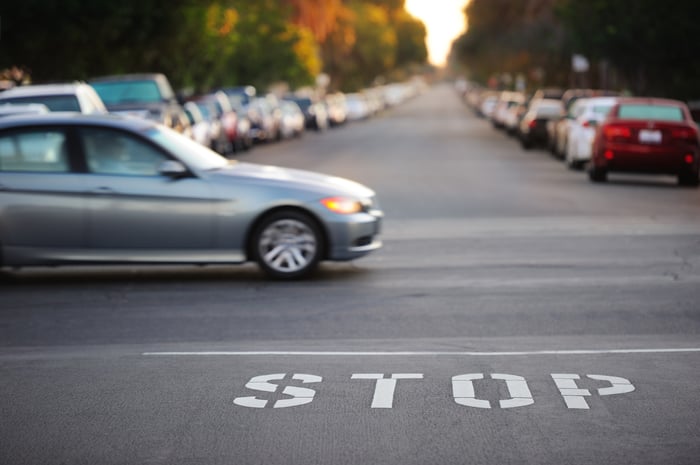 According to a notice from the National Highway Traffic Safety Administration (NHTSA), 53,822 Tesla Model S, 3, X, and Y vehicles that are using certain versions of its firmware may, while in Full Self-Driving (Beta) mode, execute a “rolling stop.”

As the NHTSA wrote in its recall report, “[t]he ‘rolling stop’ functionality is designed to allow the vehicle to travel through an all-way-stop intersection [at up to 5.6 mph] without coming to a complete stop when several operating conditions are first met.” Key among those conditions — the car would only do that when it detects no other vehicles, bicycles, or pedestrians near the intersection in question.

That may sound safe, but it’s still illegal. For this reason, NHTSA has instructed Tesla to issue a recall.

This is a recall in name only, however. Any interruption it might cause to Tesla’s business — or any opportunity it may give Rivian to steal a march on its much larger rival — will be extremely brief in duration.

The firmware updates that first created this issue were distributed to vehicles via over-the-air updates. It can and will be corrected by the same method — a simple update transmitted wirelessly to the affected automobiles, with no need for them to be brought in to dealerships.

To wit, the NHTSA says that “Tesla will disable the ‘rolling stop’ functionality on affected vehicles, starting with firmware” that will go out later this month — and notes that “no further action is necessary from [Tesla] owners who install [the] firmware release.”

Long story short, this is a problem that will take almost no time to fix, with almost no effort required on the part of Tesla owners. It’s unlikely to affect the company’s business even a bit. Thus, any stock market reaction to the news — either positive or negative — was almost certainly an overreaction.

Live Stock Market News Sep 30, 2022 0
Climate change is being fueled by the release of greenhouse gas emissions and those emissions are coming from…

Sep 30, 2022
It’s fair to say that many investors are searching for a hidden bull market currently. For most, this…

Sep 30, 2022
© Reuters By Ambar Warrick  Investing.com-- Gold prices rose slightly on Friday as pressure from the…

Sep 30, 2022
Every company is now a technology company. No matter the business a company is in, its competitive success…
Prev Next 1 of 2,068
Sign in / Join
Sign in