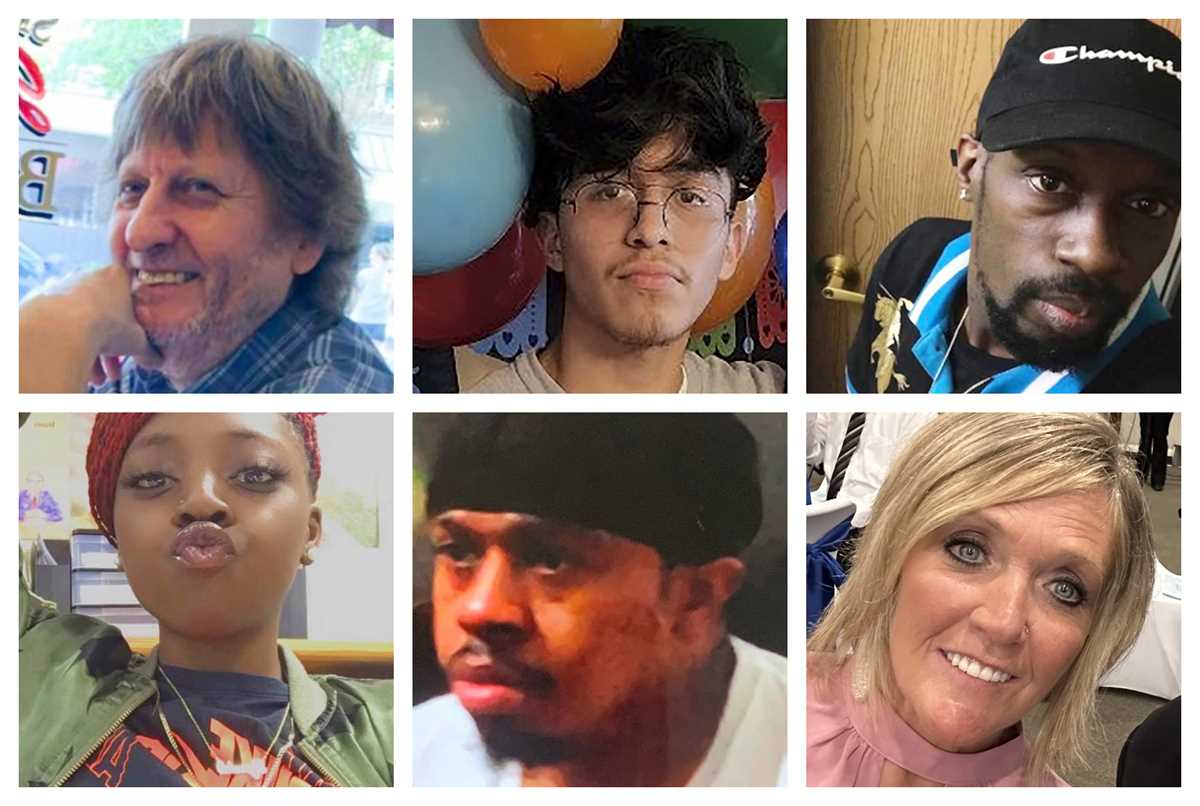 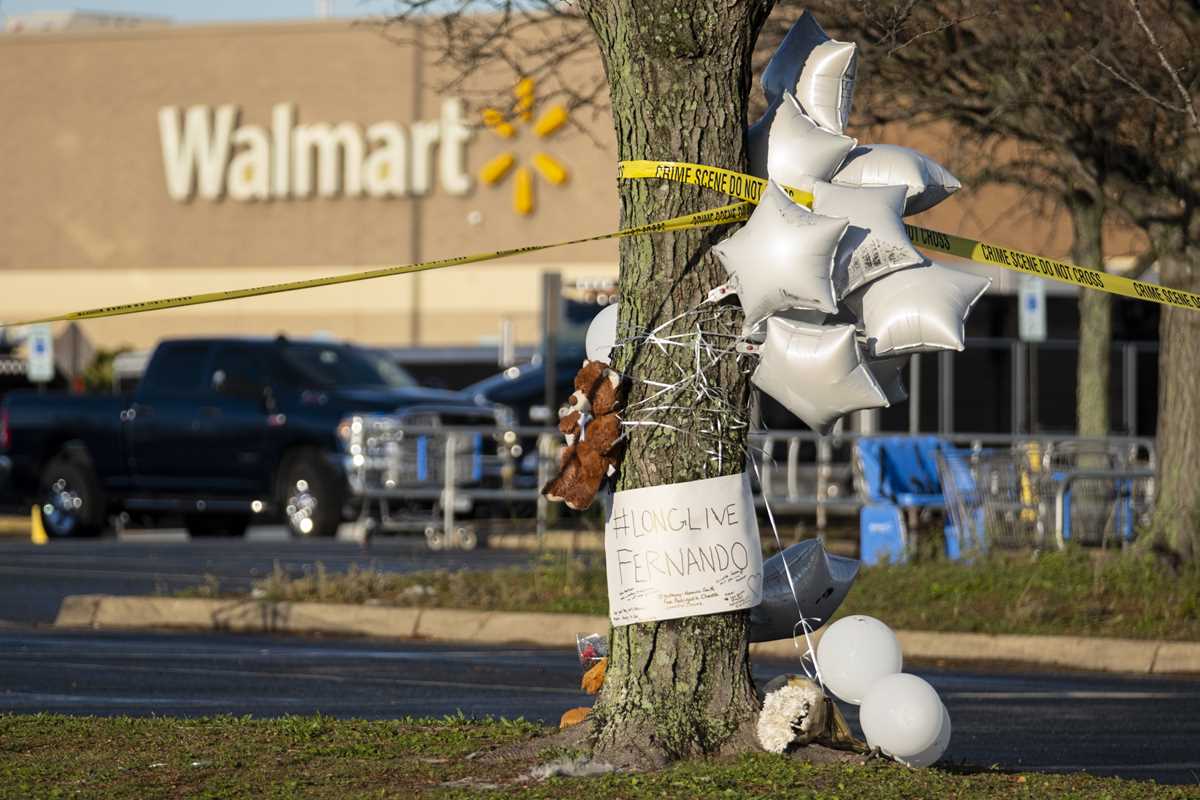 Balloon and a Teddy bear adorn a memorial for teenager Fernando Chavez-Barron, Friday, Nov. 25, 2022 , one of six killed in a Chesapeake, Va., Walmart mass shooting earlier in the week. (Billy Schuerman/The Virginian-Pilot via AP) 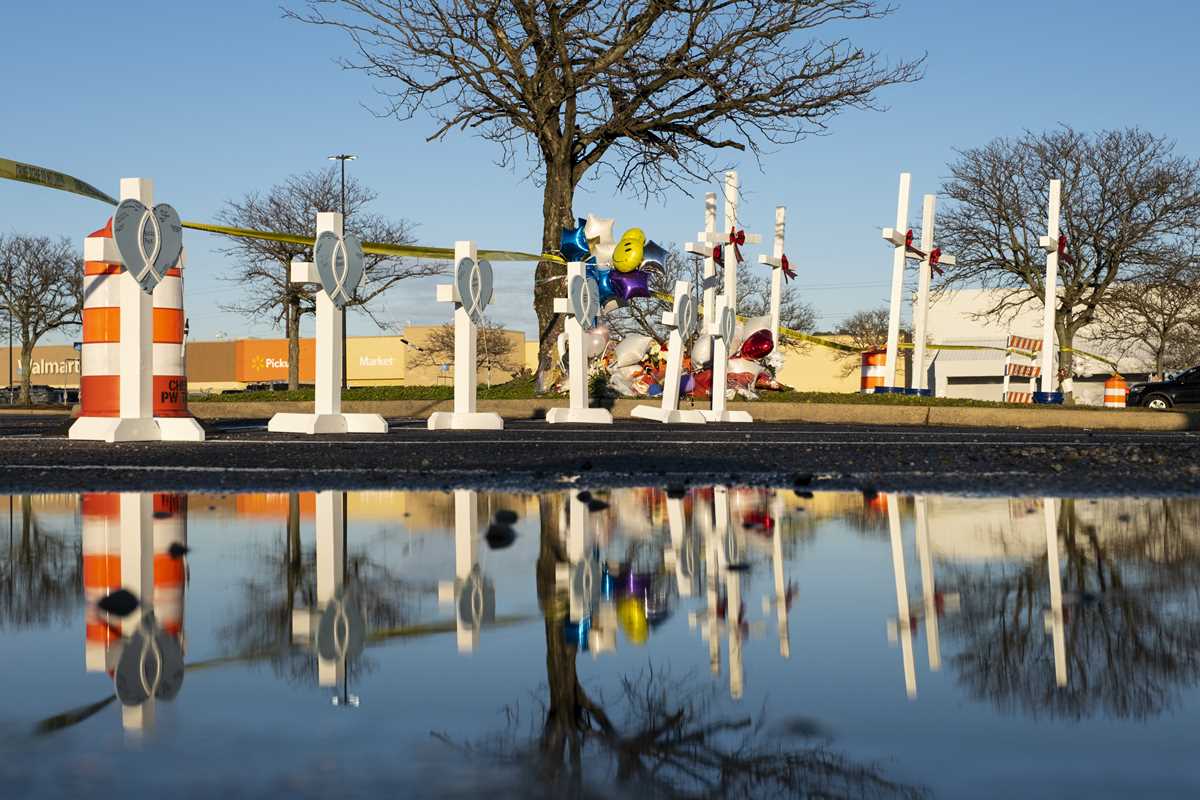 Crosses were set up at a memorial on Friday, Nov. 25, 2022 , for the six killed in a Chesapeake, Va., Walmart mass shooting earlier in the week. (Billy Schuerman/The Virginian-Pilot via AP)

CHESAPEAKE, Va. (AP) — A 16-year-old helping his family. A custodian and father of two. A mother with wedding plans. A happy-go-lucky guy. A longtime employee.

That’s how friends and family described some of the six people killed at a Walmart in Chesapeake, Virginia, when a manager opened fire with a handgun before an employee meeting Tuesday night.

Here are some details about those who were lost:

Blevins started working for Walmart in the early 1990s after the five-and-dime he owned with his wife, Teresa, went under, his stepdaughter Cassandra Yeatts told The Associated Press.

“When Walmart came to town, they kind of drove their business out of business,” Yeatts said. “My mom contacted the manager of the Walmart at Sam’s Drive and said, ‘Hey, you put us out of business and my husband needs a job.’”

Blevins had an interview and got hired on the spot as an overnight stocker, a job that included unloading trucks, Yeatts said.

He liked the third shift because he had the days to himself. He attended Norfolk Admirals hockey games and watched professional wrestling and Washington Commanders football games on TV.

Blevins also took snapshots of people and places in nearby Isle of Wight County, according to a 1996 story in the Isle of Wight Citizen. The pictures were put on postcards and sold at a different five-and-dime that his brother managed.

Blevins never missed a day of work, his stepdaughter said.

“He never had any complaints about anyone that he worked with, and he enjoyed going into work,” Yeatts said.

Blevins leaves behind three stepdaughters. And although he and his wife Teresa Blevins divorced, they remained best friends, Yeatts said.

“Thanksgiving and Christmas were his favorite holidays,” she said.

Chavez-Barron was an honors student in the 11th grade who had just begun driving and had taken a part-time job to help out his family, according to friends and a GoFundMe page set up for the family. The page’s organizer, Tamara Nelson, confirmed by phone that the page was authentic, but she declined to comment further.

“An outstanding son and excellent big brother, he loved building with Legos,” the GoFundMe page states. “He will always be remembered as humble, loving, responsible and hardworking young man. His loss is felt, not only by his family, but by so many others in his community.”

Family friend Rosy Perez told The New York Times that the teen worked the overnight shift at Walmart to assist his family.

“He wanted to help a little bit,” Perez said. “He was a very good child.”

Pyle grew up in Norfolk, Virginia, and moved back to the Hampton Roads region from Kentucky after reconnecting with her high school sweetheart on Facebook.

She and Brian Baker planned to marry next year.

“I’ve never seen her this happy, except when she talked about her children,” said a cousin, William Pillar-Gibson.

“This was not just a new chapter for her — it was the best chapter,” Pillar-Gibson told the AP. “She was a grandmother. Her children were thriving. She was with the love of her life. She was back home.”

Pyle had two adult children in their 20s and a young granddaughter who was “the light of Kellie’s life,” her cousin said.

Pyle had been the caregiver for her parents when their health failed and for her brother when he had a stroke.

“She handled everything,” Pillar-Gibson said. “When something needed to be done, she did it. And she experienced a lot of loss.”

Recently, Pyle was extending her generosity and caregiving to the mother of her fiance, Gwendolyn Bowe Baker Spencer.

In a brief statement to the AP, Spencer said: “We love her … She was an awesome, kind individual — yes she was.”

Pendleton made sure to be punctual. Although his shift as a custodian started at 10:30 p.m., he was in the break room when the shooting started just after 10, according to his mother, Michelle Johnson.

“He always came to work early so he would be on time for work,” she told The Associated Press Wednesday. “He liked his coworkers.”

Pendleton had recently celebrated his 10-year anniversary working at the store.

His mother said he didn’t have any problems at work, except with a supervisor, Andre Bing, who was identified as the gunman.

“He just didn’t like my son,” Johnson said. “He would tell me that he (Bing) would give him a hard time.”

Pendleton was born with a congenital brain disorder and grew up in Chesapeake, his mother said.

“He called me yesterday before he was going to work,” Johnson said. “I always tell him to call me when gets off work.”

As she was getting ready for bed, Johnson got a call from a family friend telling her there was a shooting at the Walmart.

Gamble was a custodian on the overnight shift and had worked at Walmart for 15 years, The Washington Post reported.

His parents Linda and Alonzo Gamble said he loved spending time with his two sons.

“He just kept to himself and did his job,” Linda Gamble said. “He was the quiet one of the family.”

His mother said Gamble enjoyed going to his 19-year-old’s football games and cheering for the Washington Commanders NFL team.

She posted on Facebook that she’s having trouble saying goodbye.

“Missing my baby right now, life is not same without my son,” she wrote.

Theodore Johnson, 41, told The New York Times that his cousin lived with her mother.

“She was young and wanted to make her own money,” he said.

“Education was in the forefront. Her family did whatever they had to do to make sure she got assistance,” Cannon said.

Johnson was willing to work to better herself, but she was also cheerful, helped younger students and “gelled” with everyone she encountered at Cannon’s Blessed Tutoring Services, she said. Johnson had a sense of style and love for music and dancing.

“She was that kid. When she came to tutoring, she was very well put together,” Cannon said. “Tyneka was a light in a dim room.”

A makeshift memorial to Johnson was placed in a grassy area outside the Walmart, with the words “Our Hearts are with you” and a basket of flowers.

The remembrance included a cluster of blue, white and gold balloons tied to a tree, alongside a stark yellow line of police tape.

Many of us will read this and be oblivious to the worldwide crisis. But if the current trends continue, it will become real to all of us soon enough. Most of us learned in elementary school that 97% of the world’s water is salt water. And only about 1% of the total water supply is drinkable.

That is becoming difficult math for several areas of the world. A severe, multi-year drought is causing water levels to sink to historically low levels. And the federal government is threatening to cut water use by 25% in the most-affected states of Arizona, California, and Nevada.

And even if we’re not put under water restrictions, we are all likely to see higher costs for food. One reason for that is that about 25% of the nation’s food supply comes from California. An American Farm Bureau Federation survey conducted in 2021 found that 40% of farmers sold off part of their cattle herds.

But opportunities present themselves in the midst of crisis, and this is no difference. In this special presentation, we’re looking at seven water stocks that look like smart buys as the world grapples for solutions.