Stocks rebound but head for worst January since 2016 By Reuters 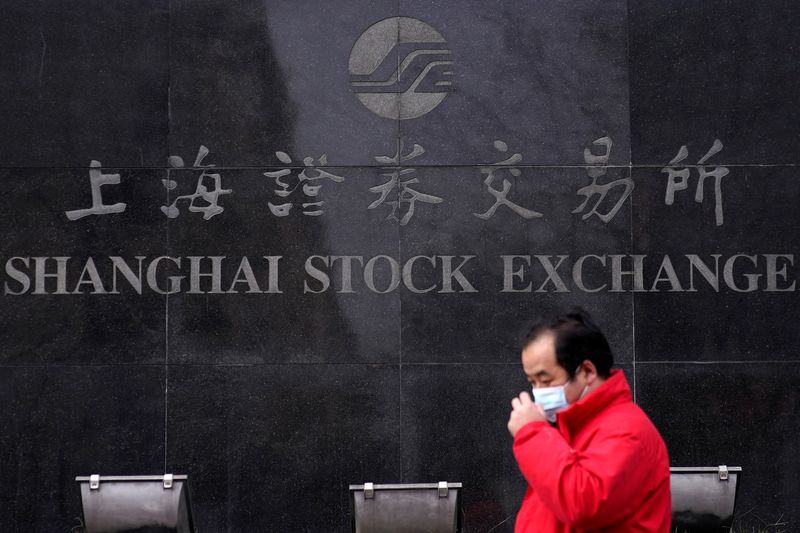 © Reuters. FILE PHOTO: A man wearing a mask walks at the Shanghai Stock Exchange building at the Pudong financial district in Shanghai, China, as the country is hit by an outbreak of a new coronavirus, February 3, 2020. REUTERS/Aly Song

LONDON (Reuters) – Stocks staged a modest rebound on Monday as traders put aside concerns about inflation and the crisis in Ukraine to dip back in, but global equities are still headed for their worst January since 2016 after a bruising month for riskier assets.

The rise in European and Asian shares follows a late surge on Wall Street on Friday when a series of forecast-beating company earnings, including from tech giant Apple (NASDAQ:), helped stabilise investor sentiment after a series of volatile sessions.

Still, investors say the backdrop for equities remains uncertain as central banks raise interest rates — the Bank of England is expected to hike again on Thursday — and another jolt higher in oil prices adds to inflationary worries.

pointed to a flat open while Nasdaq futures were higher.

The , while higher on Monday, remains down more than 6% in January — the worst start to the year since 2016.

“This is not the classic selloff affecting lower quality underperforming companies. This selloff is driven not by fundamentals but by the action of central banks at a time when growth is very strong,” said Flavio Carpenzano, Investment Director, Capital One Group.

“For years you were like a spoiled child, you could get all the money you wanted and for free and you could buy what you wanted, you didn’t care that much about quality. Now it’s the other way round, you have to be more disciplined so you need to look carefully at valuation.”

Data out on Sunday showed China’s factory activity slowed in January as a resurgence of COVID-19 cases and tough lockdowns hit production and demand.

The standoff over Ukraine also remains a thorn in the markets’ side, with concerns a Russian invasion would also cut vital gas supplies to Western Europe. Moscow denies any plan to invade.

Government bond yields held steady as the rebound in stocks limited demand for the safe-haven assets. Yields have jumped this year in anticipation of a faster rate of rate rises in 2022 but the rally in longer-term yields has paused in the past week.

Markets have swung to pricing in five hikes from the Federal Reserve this year to 1.25%, though investors still see rates peaking at a historically low 1.75%-2.0%.

Analysts at BofA think that is not nearly hawkish enough.

“We point out that markets have underpriced Fed hikes at the start of the last two hiking cycles and we think that will be the case again,” says BofA chief economist Ethan Harris. BofA now expects a raise of 25 bps at every meeting for a total of seven hikes and another four in 2023.

As well as the Bank of England, the European Central Bank meets this week but is expected to stick to its argument that inflation will recede over time.

Big data releases this week include the ISM readings on manufacturing and services, and the January jobs report.

The headline payrolls number is expected to be soft given a surge in coronavirus cases and adverse weather. The median forecast if for a rise of just 155,000, while forecasts range from a gain of 385,000 to a drop of 250,000.

More hawkish noises from Fed Chair Jerome Powell has bolstered the U.S. dollar, which has jumped 1.6% so far this month against a basket of its main rivals, hitting the highest since July 2020. It was last at 97.042.

Read More: Stocks rebound but head for worst January since 2016 By Reuters

Covid has been an easy scapegoat for economic disruption, but Brexit is biting | Anand

These stocks are likely to benefit from Sitharaman’s announcements

Sep 25, 2022
The Motley Fool TakeNot many e-commerce companies have managed to improve their profit margins in 2022 during…

Sep 25, 2022
Cathie Wood is the CEO of ARK Invest, whose ETFs substantially outperformed the broader market in the early…