The SPDR S&P 500 Trust ETF (SPY) offers diversified exposure to the overall U.S. economy – which I am very optimistic about in the long run. Probably like you, we hold this fund as a cornerstone in our retirement funds, and a large portion of our family assets is invested in this fund. A bit of general background about myself. My family is in the final stage toward retirement (after about 15 years of work). Through our personal journey, we feel that anyone can achieve the same, i.e., comfortable early retirement after ~15 years of work.

A key is to ALWAYS build TWO portfolios – the so-called barbell model. This is contrary to the popular advice of building “a” retirement portfolio or “the” perfect retirement portfolio. Whatever that portfolio is, it represents a big risk by itself. Whatever your risk level is, always build two portfolios – one portfolio below it and one above it. The more conservative portfolio below your comfortable risk level is for short-term survival. And the more aggressive portfolio above it’s for long-term growth. This is step 1 in successful investment – always delineate survival from growth.

With this background, my earlier article describes the method that we use to manage our conservative portfolio. The key is to use SPY together with dynamic cash allocation to prioritize capital preservation and liquidity and hence ensuring our short-term survival. Once our short-term survival is guaranteed, this article describes the second portfolio on the other end of the barbell. In that portfolio, we will seek growth aggressively by using dynamic leverage.

The performance of our leverage portfolio on a weekly basis is summarized in the following two charts for the past 6 months or so. The leverage portfolio’s performance is benchmarked against SPY itself to represent the overall market. It has been a really short time compared to my horizon and there is no need to read too much into the specific numbers. At their current level (plus and minus a few %), they can all change within a day of random market fluctuation. Backtest results over long periods are provided later. However, the data does provide a peek into the fundamental advantage of the leveraged portfolio. As can be seen, thanks to the proper diversification and disciplined leverage, A) the leveraged portfolio has been leading the overall market the majority of the time, and B) the leveraged portfolio actually fluctuates LESS than the overall market despite the leverage (especially during a highly volatile market correction like we experienced during the last week).

And the next chart shows the current composition of the portfolio (which we adjust on a monthly basis), and the reasons and adjustments of the compositions will be elaborated immediately below. 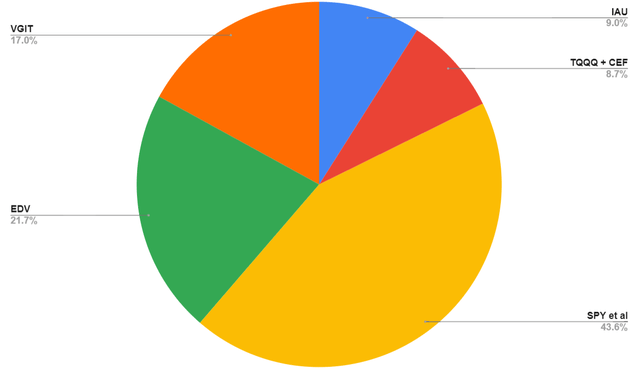 The All-Weather Portfolio and its Practical Issues

Many of you reading this probably know about Ray Dalio’s All Weather Portfolio (“AWP”). It is an approach to provide portfolio-level diversification using four different asset classes (stocks, bonds, commodities, and gold) in the following ratios.

The idea is based on rebalancing and risk parity. It forces you to reduce the expensive assets and add the cheaper ones, and it has been shown to be very effective in limiting volatility and drawdowns. The name itself suggests the essence (or the goal) – it is a portfolio built to weather any storm.

In practice, there are however several issues in the implementation of the idea. First, it is difficult, at least for individual investors, to invest in commodities with reasonable cost/fees. Second, it might be too conservative for many investors (with only 30% stocks). I wouldn’t adopt it myself now. I may consider it when I get really close to my retirement age. Third, the fixed allocation does not make intuitive sense. As a recent example, during the 2020 March COVID-19 crash, treasury yields dropped to a level (0.6% for 10-year maturity) that Dalio himself considered silly to own government bonds. Yet, if you stick to the original AWP, you would still be holding 55% of government bonds in your portfolio.

Use of SPY in the AWP with Disciplined Leveraging

I truly believe in the underlying AWP idea, and it has been the backbone of our family investing for more than a decade. Recognizing the above issues, I have been researching ways to revise it to a version that is more applicable to me. At this point, I have figured out a revision that I am comfortable with for the long run. For the commodity issue, I will just not use it (a really simple solution). Here is how.

1. Use 30% as the floor for stock allocation and SPY is the main holding of my stock allocation. I add to it based on the yield spread between the overall market and 10-year treasury yield. So stock allocation is at least 30%, and increases as stocks become less expensive compared to bonds.

2. Apply leverage to the stock holdings. In the backtest that I will show later, I used ProShares Ultra S&P500 (NYSEARCA:SSO) (a 2x leveraged S&P 500 fund) due to its longer history so I can backtest more scenarios. In my actual holdings, I use TQQQ for its better liquidity and higher leverage – so I can hold less in absolute dollar amount. The relative weight of SSO was dynamically adjusted according to 6/VIX, with VIX being the CBOE Volatility Index. So, for example, when VIX = 24, the stock allocation would consist of 25% SSO and 75% of unleveraged stock holdings. The constant obviously can be adjusted to accommodate each person’s different risk level. And I also cap my SSO exposure to 25% of my stock asset class. The whole idea is to leverage less (i.e., hold less SSO) when VIX increase and vice versa. This idea of using more leverage when volatility is low has been thoroughly discussed and tested elsewhere (e.g., see “Alpha Generation and Risk Smoothing Using Managed Volatility” by Tony Cooper and a tutorial of the method here) and won’t be further elaborated on here.

3. Then adjust the portfolio based on items 1 and 2 periodically.

The backtest result during a 15-year period, from 2006 to 2020 (SSO was created in June 2006), is shown below. As you can see, the backtest compared the leveraged AWP method against the original AWP and SPY. The portfolio was adjusted monthly, return included dividend, and leverage factor was 6/VIX. The leveraged AWP outperformed both the AWP and SPY most of the time, and really took off and began to dominate them shortly after the 2008 great crash was over. Overall, the leveraged AWP outperformed both the AWP and SPY with a significant margin during this period (14.45% CAGR compared to 8.x%). The table below provides a more detailed look. As seen, the leveraged AWP also provided lower risks, as measured by standard deviation, worst year loss, Sharpe Ratio, Sortino Ratio, et al. It only suffered a maximum drawdown that was slightly worse than the AWP (-30.6% vs -27.02%), but still significantly better than SPY (-50.97%). 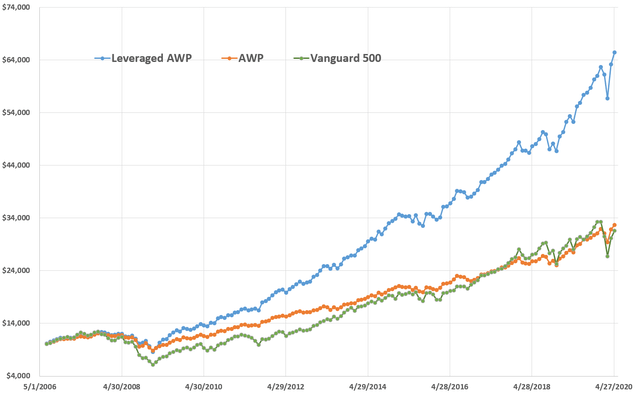 To examine the above results more closely, the next chart and table below show the comparison in a shorter period of time, during 2007 to 2011, as a stress test. Many investors probably do not worry too much during a long bull market (like the one since 2009). As long as the portfolio is making money, many investors probably do not concern too much if it makes 8% a year or 14% a year (which is actually a wise philosophy). It is in turbulent times that many investors panic and deviate from their strategy and lose money.

The results below show the comparison as a stress test to the method. As seen, the leveraged AWP outperformed both the AWP and SPY most of the time during this extremely turbulent time in terms of return. Again, taking a closer look as shown in the table below, the leveraged AWP also provided lower risks as measured by most of the risk metrics such as standard deviation and worst year loss. The only exception again was the maximum drawdown, again slightly worse than the AWP but still significantly better than the SPY. This result illustrates the effectiveness of the leveraged AWP and dynamic allocations to weather storms during a period of 5 years when the overall market essentially went nowhere, with a 50% crash in the middle. Of course, the result also illustrates that the AWP is very effective by itself during turbulent times like these. 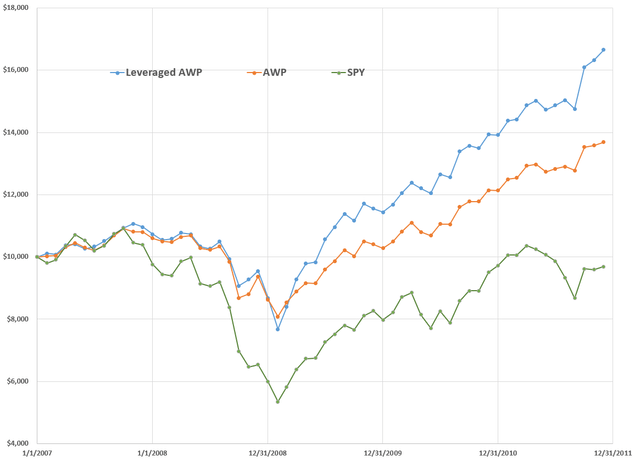 Risks with SPY and the Leveraged Approach

The use of SPY itself and the use of the above-leveraged approach both involve risks. And some of the major ones are detailed below.

First, for SPY itself, the major risks I see are its valuation risk, the unfolding macroeconomics uncertainties (e.g., COVID, inflation, interest rates, et al), and also the geopolitical uncertainties (e.g., China real-estate bubble). The CAPE ratio of SPY currently stands at about 38.3x, only slightly below (by about 10%) the historical record of 44.2x set in Dec 1999, at the peak of the tech bubble. The current valuation is not only “high” relative to the fund’s own history, it is actually the second high level in the stock market history since 1870. Combined with many ongoing macroeconomics and geopolitical uncertainties, SPY has a good probability to suffer a significant correction in the near future. And I really urge my readers to consider a hunker-down mode by increasing cash reserve in the conservative portfolio, with the method detailed in my early article here. The concept is simple. It uses the summation of SPY yield and 10-year Treasury bond yield as a signal to decide the opportunity cost of holding cash. And now the summation of SPY yield and treasury rate is at a historical low, sending a strong signal to increase cash reserve.

The use of leveraged funds like TQQQ involves several risks, including but not limited to risks of a total loss, fee drag, and dividend drag. If you hold TQQQ, a 33.3% daily crash would lead to total loss since it is 3x leveraged. With a ~0.9% fee, holding TQQQ also creates a fee drag compared to ~0.03% fee for unleveraged ETF like SPY. And finally, TQQQ as a leveraged fund does not pay dividends, thus also creating a dividend drag. In the end, the additional advantage provided by using leverage may or may not be sufficient to overcome these risks.

Like many investors, the SPY fund is a cornerstone for our retirement portfolios. With the fund’s valuation near a historic peak, not only its own history but the entire history of the stock market, capital preservation and risk control should be a priority. This article describes a barbell model to build two portfolios based on SPY to delineate survival from growth.

My earlier article describes the method that we use to manage our survival portfolio, and this one describes the aggressive growth portfolio by the disciplined use of leverage. The key takeaways are:

1. Never confuse short-term and long-term risks, and do not pursue growth unless/until survival is guaranteed.

2. Once short-term survival is guaranteed, use a more aggressive approach to seek growth. And this article describes our method of using disciplined and dynamic leverage to achieve aggressive growth. The dynamic adjustment is based on volatility, which is relatively easier to predict than stock market returns. And the key idea is to leverage less when VIX increases, and vice versa, in a systematic and disciplined way.

3. Both from backtest results and our real portfolio performance, the leveraged portfolio has A) outperformed the overall market by a substantial alpha in the long term, and B) demonstrated LOWER fluctuations than the overall market despite the leverage especially during highly volatile market corrections. The underlying reasons are the proper diversification and disciplined use of leverage.

budget impact on stock market: Should you rejig your portfolio after capex push in Budget?​