SPDR S&P 500 Trust SPY: One Of The Best ETFs For Passive Investing


The SPDR S&P 500 Trust ETF (NYSEARCA:SPY) from State Street Global Advisors has been the standard for investing with $409.14 billion in assets under management as of 10/21/21. The ETF franchise from Global Advisors crossed the $1 trillion of assets under management in 2021 with flows into the SPDR ETFs surpassing the 2020 flows and are on track for a record year. SPY was the first exchange-traded fund (ETF) listed in the United States as it launched almost three decades ago in January of 1993. How many times have you heard Jim Cramer say you’re first $10,000 should be invested in an index fund or seen Warren Buffett discuss the importance of investing in index funds? Mr. Buffett gave an interview on retirement in 2017 and said, “Consistently buy an S&P 500 low-cost index fund.”

SPY utilizes an indexing investment approach designed to track the performance of the Standard & Poor’s 500 Index. The S&P 500 was created in 1957 and was the first U.S market-cap-weighted stock market index. To be included in the S&P 500 index, companies must be based in the U.S, have an unadjusted market cap of $13.1 billion or greater, and a float-adjusted market cap at least 50% of the unadjusted market cap minimum market cap threshold. I consider SPY the standard for investing because it is the most referenced fund that I read about, it was the first ETF in the United States, and it’s the largest S&P ETF. SPY has significantly more assets under management than its peers as the Vanguard S&P 500 ETF has $246.59 billion and the iShares Core S&P 500 ETF has $303.68 billion of assets under management. 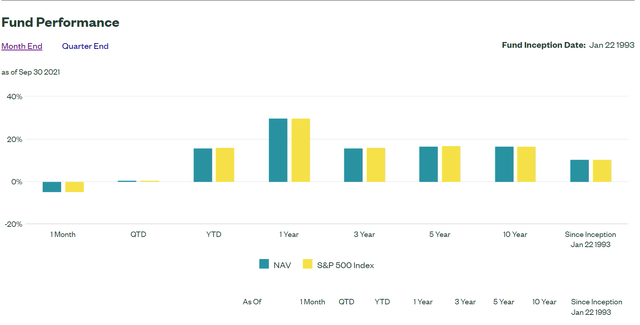 SPY provides a hands-off approach to investing and minimizes expenses taking investment professionals out of the equation.

Whether an experienced investor or a novice, SPY is a foundational asset to any investment portfolio. SPY provides exposure to the largest companies in the United States for a low cost of 0.0945%. This means that on $10,000 with an annual rate of a 9% return, you would pay just $94.50 for State Street Global Advisors to manage your money for you over a decade. Regardless if it’s SPY or Vanguard S&P 500 ETF (NYSEARCA:VOO), a low-cost index fund is a phenomenal investment and can generate substantial amounts of gains over a long period of time.

I consider investing SPY to be a low-risk investment as you’re investing in the market’s largest companies. It’s simple and takes a lot less work than picking individual investments. Stocks don’t always go up, and bad investments can be made. I love diversification, and SPY provides excellent risk mitigation as it covers 11 different market sectors. Since SPY’s inception, it has returned 10.47% on an annual basis since 1993. Hypothetically if you assume a 10% annual return over the next 30 years and invest $1,000 a month in SPY, you would contribute $360,000 and end with $2,260,487.92. Today the max contribution limit to a work-sponsored 401k is $19,500. If you’re in a position where you can max out your 401k or replicate this investment in an individual account, the $19,500 annual allocation will break down to $1,625 per month, and it would be worth $3,673,292.88 after 30 years. Not bad for passively investing a set amount monthly and letting SPY do the work for you. 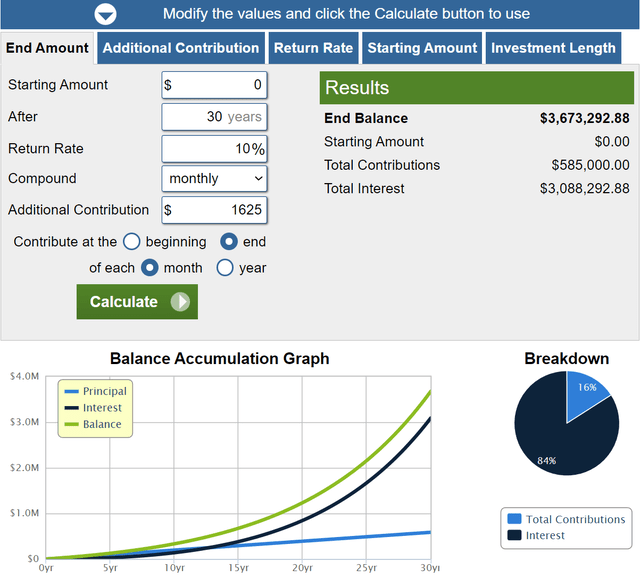 My favorite thing about low-cost index funds is that they allow you to keep a larger capital position. I have nothing against investment professionals, but allowing a financial advisor to invest in funds such as SPY is financial suicide. According to smartasset.com the average cost for a financial advisor is between 1% – 2% of the assets under management annually:

Financial planners can be great for many things, but I am cheap when it comes to money, and I am not willing to pay someone for work they are not doing. This is why I love low-cost index funds. They allow an individual to passively allocate capital into an investment such as SPY and get charged next to nothing to have a management team do the work and generate market returns that have averaged 10.47% annually. SPY has been an incredible tool for generating wealth, and it can be done without paying for investment advice from an investment professional.

By investing in SPY and owning one share, you’re gaining an equity position in the 505 largest companies in America. As of 10/21/21, the largest individual holdings within SPY were Apple (AAPL), Microsoft (MSFT), Amazon (AMZN), Alphabet (GOOGL), Facebook (FB), Tesla (TSLA), NVIDIA Corporation (NVDA), Berkshire Hathaway Inc. Class B (BRK.B), and JPMorgan Chase (JPM). Without even looking at the other 496 companies, just knowing that 28.45% of SPY’s assets were in these ten companies should provide investors with a level of assurance that their investment will provide capital appreciation for years to come. Outside of the top ten holdings, you will find the most recognizable companies such as Visa (V), Home Depot (HD), Walt Disney (DIS), Bank of America (BAC), Procter & Gamble (PG), Costco (COST), PayPal (PYPL), Pfizer (PFE) and Verizon Communications (VZ). SPY is full of household names, and investors can sleep well at night knowing that they are benefiting from America’s progress by having an investment in the highest quality companies across the nation.

SPY has a well-balanced approach to mitigate risk by allocating its assets across 11 sectors of the economy. SPY provides exposure to Communication Services, Consumer Discretionary, Consumer Staples, Energy, Financials, Health Care, Industrials, Information Technology, Materials, Real Estate, and Utilities. SPY has a 27.83% allocation to technology which I am a fan of as I believe technological advances will continue to lead the markets higher over the coming years. Regardless of whether you’re at Best Buy (BBY), HD, the supermarket, or walking through a mall, many of the products you are considering purchasing are made by companies that make up SPY. I believe America is still the best place to invest, and when it comes to an overall fund, SPY is one of the best options in the marketplace.

It’s hard to complain about investing in SPY with its current track record. Year to date, SPY has appreciated by 15.8%. In the past year, SPY is up 29.81%. Over the past three years, SPY’s average return is 15.82%, while SPY has averaged a return of 16.72% over the last five years. Over a longer period of time, SPY has generated an average return of 16.72% over the past ten years, and going back almost three decades to 1993; SPY has an average annual return of 10.34%. SPY also pays a small dividend of $5.66 per share, a forward yield of 1.25%. In addition to any capital you are allocating over the year, SPY is also spinning off 1.25%, which can be reinvested into the fund. When it comes to passive investing SPY is at the top of the food chain. 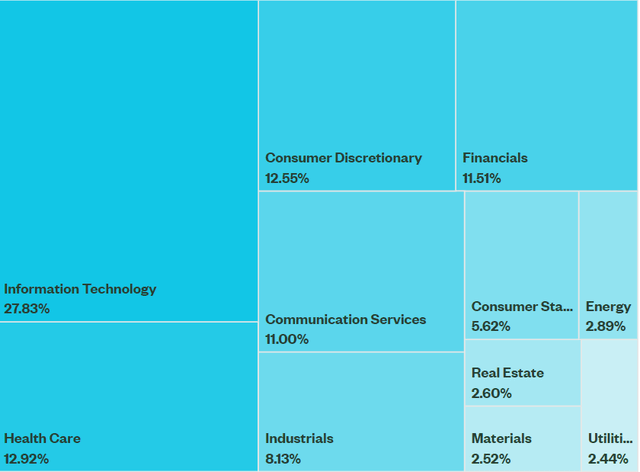 Every investment comes with risk, and investors should not look at index funds as the exception to the rule. When markets have a flash crash, correction, or a short sell-off, index funds are often impacted by the downturn negatively. Just because SPY has an average annual return in the double digits doesn’t mean this will occur over the next several decades. Passive investing through index funds will follow market trends, which investors don’t have control over. The risk with index funds such as SPY isn’t just with traditional downside risk. You’re essentially limiting your upside potential in bull markets by holding 500 or so positions and not consolidating into a few that are taking off.

When you invest in an index fund, it’s the equivalent of driving a stick shift for years then switching to an automatic. You lose control in the decision-making process, and the first thing that disappears is the ability to react. If a stock such as TSLA becomes overvalued, it will increase its portfolio weight within the index. In a personal account, you would have the option to trim a position in TSLA if you felt it was at risk of selling off. In an index fund, you don’t have the option to lower your exposure to TSLA if you feel it has increased by too much. You also have no input or control over the investments within the portfolio. There may be specific companies you would like to own that aren’t part of the composition of an index fund. You’re also limiting the upside potential with passive investing through index funds. Many investors have used AAPL as a core portfolio position. Over the past five years, investing in America’s largest company would have generated a 423% return. While AAPL is the largest holding in SPY, only a 113% return has been achieved by SPY over the same period.

Some people like passively investing through index funds, and others enjoy doing the research and controlling their own destiny, while others deploy a hybrid approach. The main questions that need to be answered are the overall objective and your risk tolerance? If you had invested in the five largest companies in America over the past five years, AAPL is up 423%, MSFT 416.39%, AMZN 329.66%, GOOGL 235.71%, and FB is up 147.25%, compared to 113.19% generated by SPY. If the goal was to accumulate the most capital, an investor could have looked at the top holding from several funds and placed a bet on AAPL, MSFT, AMZN, GOOGL, FB, and significantly outperformed the market. This would require a large risk tolerance because they are all big tech names, so if technology was to come out of favor, there would be no diversification to help mitigate some of the downside. 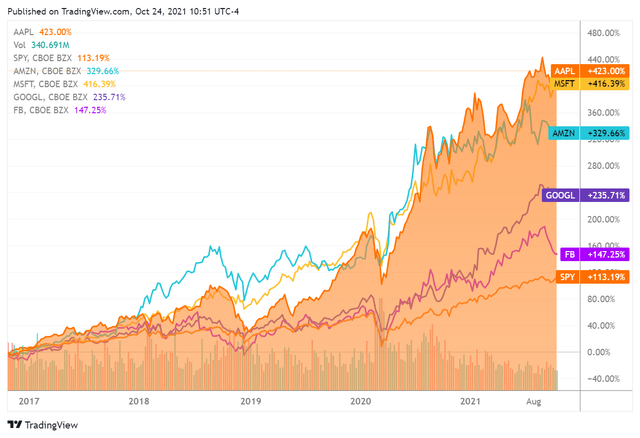 I firmly believe that index funds should be part of an overall investment strategy, and SPY is at the top of the food chain. SPY has a low expense ratio, provides exposure to the most desired companies in America, and has generated 29.81% of capital appreciation over the past year. By starting out early, investing in SPY could provide one of the easiest methods to becoming a millionaire by just investing $500 a month. Regardless if you are in your early 20s or in your late 30s, if SPY can replicate its previous performance and generate an annualized return of 10% annually, an investment of $500 a month would appreciate to $1,130,243.96 over the next 30 years. The best part is that you pay less than 1/10th of a percent for the management fee, and you don’t even have to seek out a financial planner. Just keep reading articles on Seeking Alpha, do your homework, and financial freedom could occur sooner than you expect.