For the past three months, we have seen negative economic surprises. The severity of the negativity has increased over this time period. This has been true of both the US and ex-US markets. 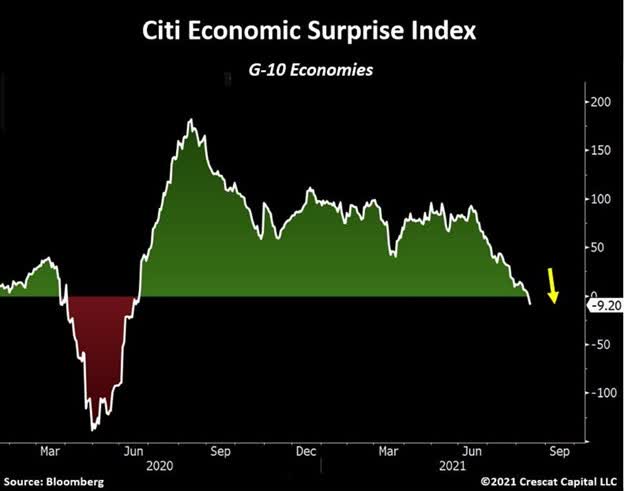 Yet the market remains evasive of the impact of this negative data. Now, as we head into September, we are looking at all-time highs. September is historically the worst month to be a bull in the stock market.

Today, we will look into September seasonality and the increasing number of bearish catalysts for the market.

Last September, the market did not snub seasonality. We saw the SPY fall 10%, pushing below the $320 mark. The SPDR S&P 500 Trust ETF (SPY) is currently up 20% YTD, and so even a 10% fall won’t cause most investors to see a loss. Still, holding the SPY through September has been a consistent opportunity cost over time. Below is the result of a “seasonal” holding of SPY, in which we go 100% cash during September and hold the SPY otherwise, contrasted with a buy-and-hold strategy (SPY_HOLD): 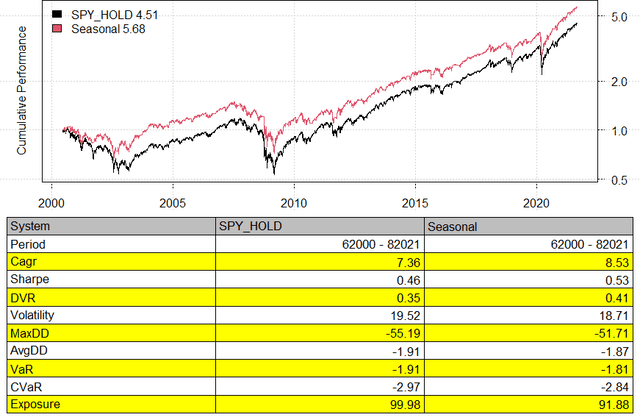 You can see that the compound annual growth rate of the seasonal strategy is significantly larger than the buy-and-hold strategy, despite the seasonal strategy giving less exposure. The fact that the max drawdowns are nearly equal implies that the difference in returns is not due to including any outliers (i.e., sudden crashes or corrections). The variance of both strategies are roughly equal, and thus we must conclude that the reason for the seasonal strategy prevailing is in avoiding consistent pullbacks of statistically expected size.

In the 28 years the SPY has traded, the average loss in September has been $4.86, while the average gain has been $3.05. This shows a skew in the risk/reward in favor of the bears. Selling at the end of August is one of the best things you can do with the SPY to avoid drawdowns.

We are entering September on the back of an up gap. On August 30, the SPY gapped up, and that gap has yet to fill. To me, this gap looks like an area gap due to the small size and low volume.

Of course, I backtested the gap to gain an objective reading on whether the gap is likely to be an area gap. Indeed, this type of gap usually closes quickly – an area gap. By taking a short position over the average closing time (three days), you gain significant cumulative performance with little exposure: 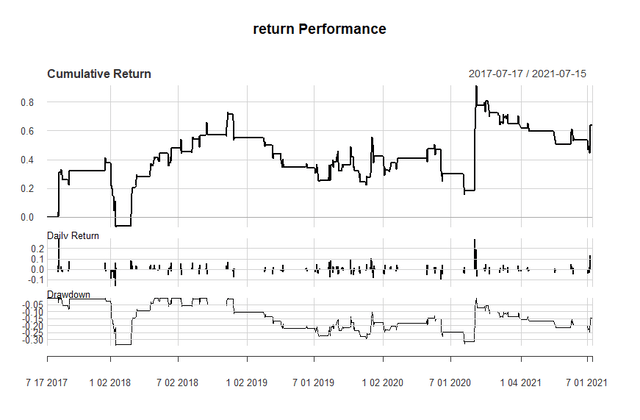 This type of trade does turn against you on occasion, with significant drawdowns, however. If you like trading gaps, as I do, you’re looking for the kurtosis trade here – so play options, and don’t short the stock, lest you expose yourself to too much upside risk. I’ll offer an options strategy that works for both this gap and the seasonal pattern at the end of the article; I do like that these two aspects are signaling a short position at roughly the same time.

If you follow me, you might know that I believe that combination of the c19 mutations and the implausibility of herd immunity in the US will likely lead to another economic downturn. The increasing number of negative economic surprises, as I mentioned at the beginning of this article, is likely correlated to the growth in delta variant infection numbers.

But in addition to this factor, which I discussed in-depth in my previous article, we have some worrying bearish catalysts. Among the negative economic surprises, today we have a significant miss in the ADP jobs report, a miss of nearly 50%. To me, this is another piece of evidence that we are entering a period of stagflation, which is a period of high unemployment and inflation.

Although inflation is usually occurring in a healthy economy, the current inflation numbers are higher than expected, prompting many analysts to expect Fed tapering. A weaker-than-expected economic recovery occurring simultaneously with a reduction in spending power (i.e., inflation) is a notoriously difficult economic problem to solve. Fixed-income workers and those reliant on fixed unemployment will curtail their spending as prices increase, hurting the earnings of companies, which clearly has an effect on the stock market. Add in the fact that millions of the more-than-expected still unemployed will be losing their benefits in the coming months and you have a strong bearish catalyst looming over the market.

We also have the valuation factor. Few would disagree that valuations are stretched at this point. The Buffett indicator, for one, is over 200%.

The Buffett indicator is the ratio of the entire stock market’s market cap to the economy, as measured by GDP. Simple as it might be, Buffett himself considers this the best measurement of over/undervaluation. At present the aggregate US market value is $55T, while the GDP is only $23T.

As the market is showing upward momentum in light of negative economic surprises, it appears as though these two values are diverging, pushing the Buffett indicator closer to 250%. From this perspective, prices in the stock market are misaligned with the economic growth data. If you, as I do, believe that the market is rational and thus backed by macroeconomic factors, eventually the economy must show growth to the tune of 100% or the stock market must pull back to realign with the economic data; the latter is much more likely.

I’m trading the SPY via short diagonal calendar call spreads. I intend to hold through September, closing on October the 1st.

The risk/reward here is asymmetrical. With this strategy, we are set to profit on a downward breakout in the SPY over September, and yet we can still profit on the upside. Our maximum loss occurs if the SPY ends the month at $453. In this case, the long calls will expire worthless, while the short calls will be worth roughly $380, as per my calculations. As the strategy above brings in roughly $240 in premium, this would equate to a loss of $140. If the SPY falls below $452 by October, we keep the $240 premium. And if the SPY rises above $453, the difference between the options prices will be roughly $1.00, which would equate to a profit of the premium, $240, minus $100 – or $140. Thus, the upside profit to the loss due to consolidation is roughly 1:1, while the downside risk/reward is about 70% more reward than risk.

Let me know what you think about this strategy in the comments section below.

The 3 Best ETFs to Buy as the Market Plunges

How These 2 Dueling Impulses Could Impact the Stock Market