Now that we have been told officially that inflation is on the rise, I’m sure that some investors are turning to the SPDR S&P 500 Trust (SPY) in the hope that stocks will rise at least as much as inflation. The US is by no means alone in experiencing an upward trend in the cost of the things we buy every day, and in many of those other countries local stock markets have risen, but not by as much as the CPI.

The stock market is not the only option for investors hoping to maintain the purchasing power of their hard-earned cash. For instance, in August I wrote an article titled, “WEAT: The New Bitcoin“, in which I outlined the case for an investment in wheat. Since its publication, the Teucrium Wheat Fund (WEAT) has increased by 6.82% whilst over the same period, SPY has risen by 5.44%.

In this article I explore several alternative options for those SPY investors keen to explore other potential avenues that will enable them to hang on to the real value of their wealth.

A fair number of media experts are forecasting declines in the stock market as a result of inflationary pressures, and one can readily understand their reasoning. For a start, inflation affects how stockholders value future income. If for instance we buy Apple (NASDAQ:AAPL), we are purchasing future cash flows based on expected profits. Under normal circumstances, these future cash flows are used to value a company based on a financial concept called “present value”, which is the present value of money to be pocketed in the future. And present value factors in the impact of interest rates and inflation. So, if both interest rates and inflation go up, the present value should, theoretically, go down.

Next, unless you are a government with enormous debts, inflation is generally agreed to be a bad sign. So, a number of investors consider the onset of inflation to be a harbinger of gloomy times ahead and sell before the expected storm hits, so to speak.

The idea that inflation will cause a slump in stock prices may, to some, appear counterintuitive. After all, can’t companies simply increase their prices in lockstep with inflation? Then this would lead to higher future cash flows and thus a higher present value today. That is to say, the effect of inflation is cancelled out. This kind of thinking would certainly seem to be at the forefront of investors’ minds in some countries experiencing rampant inflation.

In Venezuela, inflation is running at an annualized rate of around 5,000%. This, far from causing a stock market crash, has witnessed a rise of approximately 200% in the stock index this year. Whilst it is true to say that, for locals, an investment in stocks would be better than putting savings under the bed, investors still lost real purchasing power of their invested money. 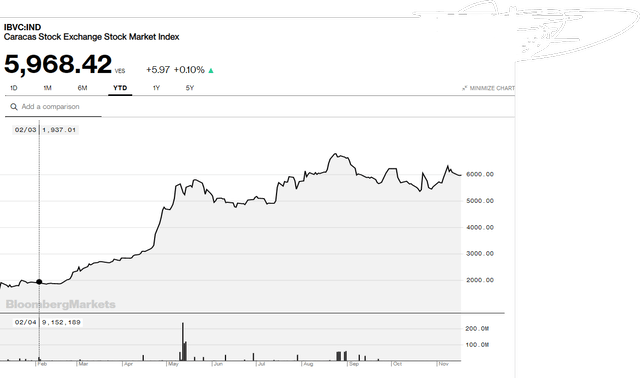 In Europe, it is a similar story in Turkey, since the beginning of 2021, the index has returned about 16% whilst inflation has hovered around 19%. May I add that the annual dividend rate for the index has been reported as 2.71%, so investors just about managed to maintain the purchasing power of their money. 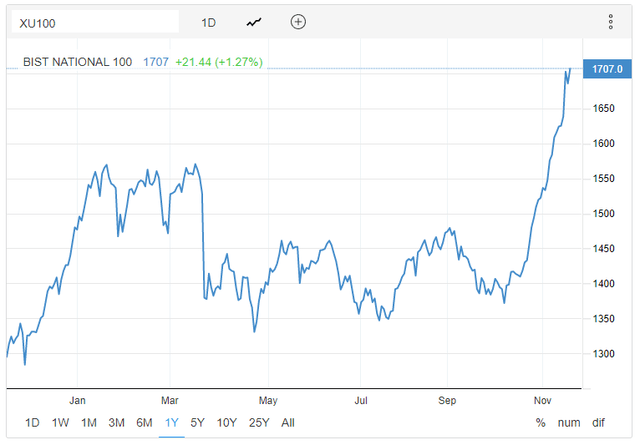 As if to underline the point I’m making, it was recently announced that:

And yet, SPY has not tanked as prophesied by the media pundits.

Investors in SPY must be feeling pretty pleased with themselves at this stage of the year. Afterall, the ticker has increased by around 30% and also provides a yield of 1.21%; comfortably ahead of the official inflation figure. However, set against various commodity indices, the rise is not so heart-warming.

For instance, in November last year, oil was selling for just under $40 a barrel, now it’s knocking on the door of $80, which of course represents an increase of almost 100%. Oil is by no means the only commodity that is experiencing soaring prices. Uranium is another fuel that is in the news a lot these days. A year ago, a pound of uranium was about $30, but now the price is heading towards $50; a 66% increase.

As we head into 2022, it is impossible to determine whether SPY will continue its inflation beating upward trend or develop into a bear market. As previously mentioned, there are many commentators who suggest that the latter is the most likely outcome. From my perspective, the four reasons most often touted for a decline are; overstretched valuations, a rise in capital costs, weakening economic fundamentals, and lowered expected earnings.

An impartial reviewer of many of the commonly used measures would I’m sure agree that the S&P 500 is a tad overvalued. Take the P/E ratio for example. It currently stands at around 29.5, which is considerably above the mean for the last 100 years or so. It is a similar picture for the Schiller P/E ratio, which implies a lower-than-average long term annual return at current prices. The oft quoted Buffett indicator claims that the market is about 72% over valued.

However, set against these stark numbers, the results of many companies indicate a further upward trend. As of the 29th October, those companies that had reported Q3 earnings, 75% of them declared higher revenues. Also, 82% had reported EPS above estimates. Further encouragement for an additional rise in SPY is given by the positive trend of the Return on Equity, as shown in the table below.

The largesse of the Fed has gone a long way to provide the feedstock of the economy and thus the boom in stock prices. A couple of years ago, I frequently read the phrase “helicopter money” to describe the way in which the Fed was pumping money into the economy to stave off a collapse. This term now seems a little inadequate to describe the scale at which money is currently being printed. Any suggestions?

Of course, this situation cannot continue forever, and this was admitted by Jerome Powell earlier this month. In a bulletin that should ring alarm bells for investors, the Fed Chief stated that U.S. debt is on an “unsustainable path”. Why should this announcement be greeted with some trepidation? Well, it hints at a future reduction in the flow of money and an upward movement in interest rates, both of which are a negative for stocks.

Given the lack of certainty regarding the economy and therefore the promise that the stock market will provide above inflation returns is not a given, one area that investors may wish to consider is a position in commodities. It goes without saying that commodities in plentiful supply or are only used in quantity during periods of economic expansion, may not provide adequate returns, even in an inflationary environment. There are a number of commodities that may remain in short supply, even in an economic downturn. Whilst many are worth considering, for the purposes of this article, I will outline the case for uranium, oil and grains.

I suspect that by now, many readers will be familiar with the drivers behind the recent northward march of the price of uranium. The nuclear accident at Fukushima pushed prices of the element to new lows, which then led to the likes of Cameco (CCJ), Paladin Energy (OTCQX:PALAF) and Kazatomprom (London listed, ticker – KAP) to either suspend or reduce production. Despite the accident in 2011, nuclear power is now seen as a “green” energy source and around 54 reactors are under construction with a further 100 planned to come on stream in the future. Even Japan is restarting reactors after taking them offline following the dreadful mishap. There is, therefore, an impending shortage of the non-ferrous metal coupled with increasing demand.

There are a variety of ways in which to invest in the sector. There are ETFs that focus on the miners or there is the Sprott Physical Uranium Trust (OTCPK:SRUUF)

Contrary to expectations, given the push towards “green” energy, there are reports of an impending oil shortage. The reasons for the deficit include the fall in output from exhausted wells and the slump in industry investment, particularly in the US. In fact, there may well have been as much as a 50% drop in US shale investment over the last 12 months.

Undoubtedly, the price of oil is on a wild ride, nevertheless, the overall trend of late is certainly to the upside.

A number of the factors I previously described in my article have led to a considerable rise in the price of wheat. Understandably, this has attracted the attention of farmers and the prevailing high prices have encouraged large plantings. However, this is unlikely to lead to much lower prices as the input costs have soared. One such cost is fertilizer, which over the last year has increased more than 100%; as per the chart below.

Then there is the cost of oil, which is used at every stage of production; from planting to the transport of the harvested product. It goes without saying these input costs apply to other crops such as corn and sugar cane.

One crop that is less affected by surging fertilizer prices is the legume soybean. The reason for this is that the roots have a nitrogen fixing capacity, that is to say, to a large extent they are self-fertilizing. Given that it will be cheaper to grow soybean, it is expected that farmers will therefore switch to soybean, and this will naturally lead to a decline in the production of other crops, such as wheat and corn. In fact, the switch to soybean is expected to be so great that many analysts have a bearish outlook on the crop.

The bearish outlook may be unwarranted as the demand for soyabean may well increase in the near term. This requirement comes from new applications for the oil that can be extracted from soybeans; biodegradable plastics and jet fuel.

Finally, there are several reports concerning grains that state that there is a deficit in their supply globally. One of which comes from a recent report published by the Food and Agriculture Organisation of the United Nations. The findings of the report are summarised in the graphic given below. 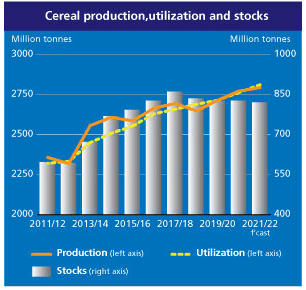 Another graphic which highlights this situation appeared recently on the Teucrium Twitter account. This graphic confirms that there is an expected supply shortfall. 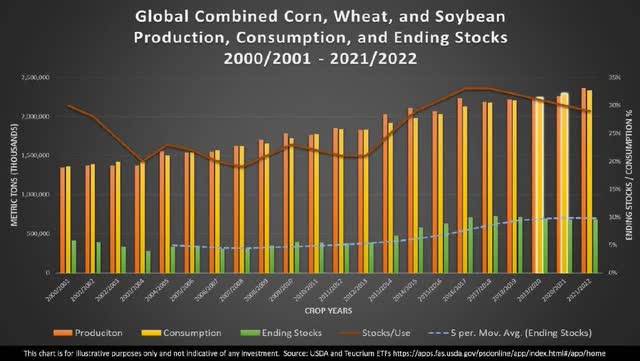 SPY has had a good run; however, there are indications that the returns may slow in the future. This combined with “transitory” inflation becoming less so as time goes on may encourage investors to seek alternative investments to shelter their wealth.

Sensex, Nifty likely to remain volatile during this week

Is Putin Bluffing? How Stocks Are Reacting On Heels Of Thinly-Veiled Nuke Threats…

Is the S&P 500 All You Need to Retire a Millionaire?

Live Stock Market News Sep 25, 2022 0
Cathie Wood is the CEO of ARK Invest, whose ETFs substantially outperformed the broader market in the early…

Sep 25, 2022
Atlassian (TEAM -1.42%) has generated massive gains for its early investors since its initial public offering…

Sep 25, 2022
The countdown for next month's key Congress of the Communist Party of China (CPC)…

BigCommerce: Lean In As The Stock Crumbles (NASDAQ:BIGC)