The Phase II drill program consisted of 3,976 metres of RC drilling in 15 holes, all placed in the North Zone target with the focus of testing the Paciencia Vein system continuity and some magnetic targets.

Results from this program are summarized below in Table 1. The drill program defined the extension of the two previously discovered mineralized shoots and discovered a third shoot of mineralization at depth in the Paciencia Oeste vein segment with nine metres averaging 4.5 g/t AuEq, including a high-grade zone with a three-metre interval of 12.7 g/t AuEq in hole PPRC-22-45. True widths are estimated to be 75-80% of the interval lengths in PPRC-22-45. 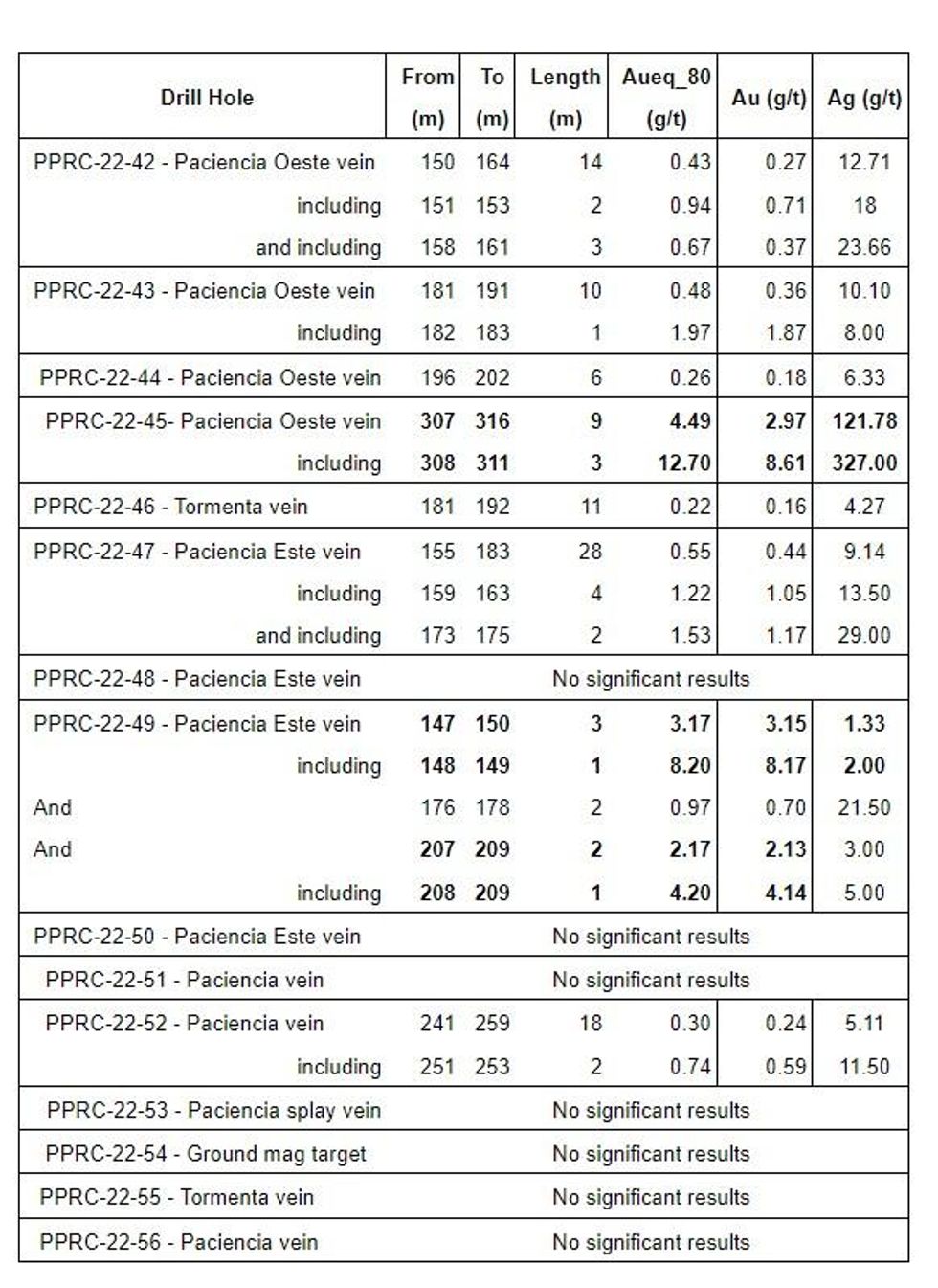 Three mineralized shoots have been discovered to date (Figure 1). The Paciencia/Paciencia Este shoot is currently the largest, at approximately 400 metres along strike and approximately 170 metres vertical extension. The second shoot is defined in the Paciencia Oeste vein, with a defined 200 metres of strike (open to the east) and 130 metres vertical extension. A third shoot, discovered in this Phase II program, remains open in all directions with mineralization starting at a depth of 200 metres below surface. Estimated true width of each shoot is 10-15 metres.

Figure 2: Maps of Astra Pampa Paciencia project and Faride Mine, with detail of the RC drill programs (Phase I = white stars, Phase II = blue dots) in the North Zone target in comparison with the Faride vein system and its mineralized shoots (yellow in Paciencia vein segments). (CNW Group/Astra Expl

Similarities between Faride and Pampa Paciencia (Figures 1 & 2) based on results from this program confirm that the Paciencia vein system has the potential for multiple shoots of high-grade mineralization in a similar structural setting to Faride. The Faride mineralized system is hosted within several NW to E-W veins covering an area of eight square kilometres. Mineralization is hosted within a total of eight mineralized shoots separated by NE-striking faults within a 2.2-kilometre-long NW-striking structure. Historical reserves of 234,000 gold ounces at Faride were cited following re-mapping of the project by Coeur in the 1990s.2

The magnetic targets that were drilled (Figure 3) intersected veins with low or no precious metal grades. Anomalous mineralization was intersected in the Tormenta vein (a splay of the Paciencia vein system to the west, with at least 300 metres of strike length) with 11 metres at 0.22 g/t AuEq at the intersection with Paciencia Oeste vein. These newly discovered veins are thick structures (estimated true thickness of 20 metres in PPRC-22-46 and 5 metres in PPRC-22-55) with potential to host additional mineralized shoots. 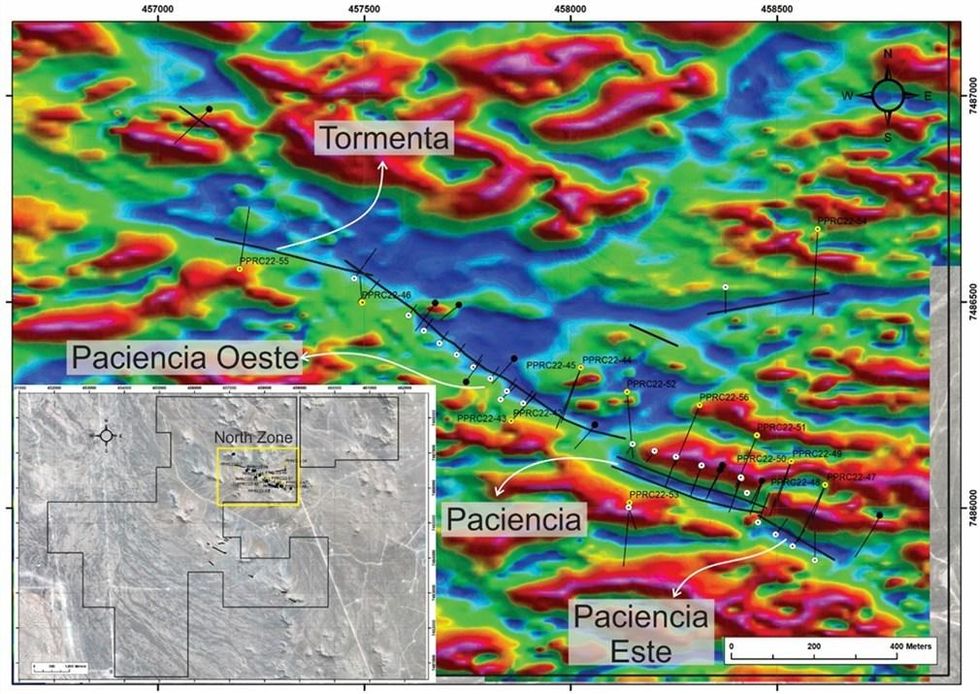 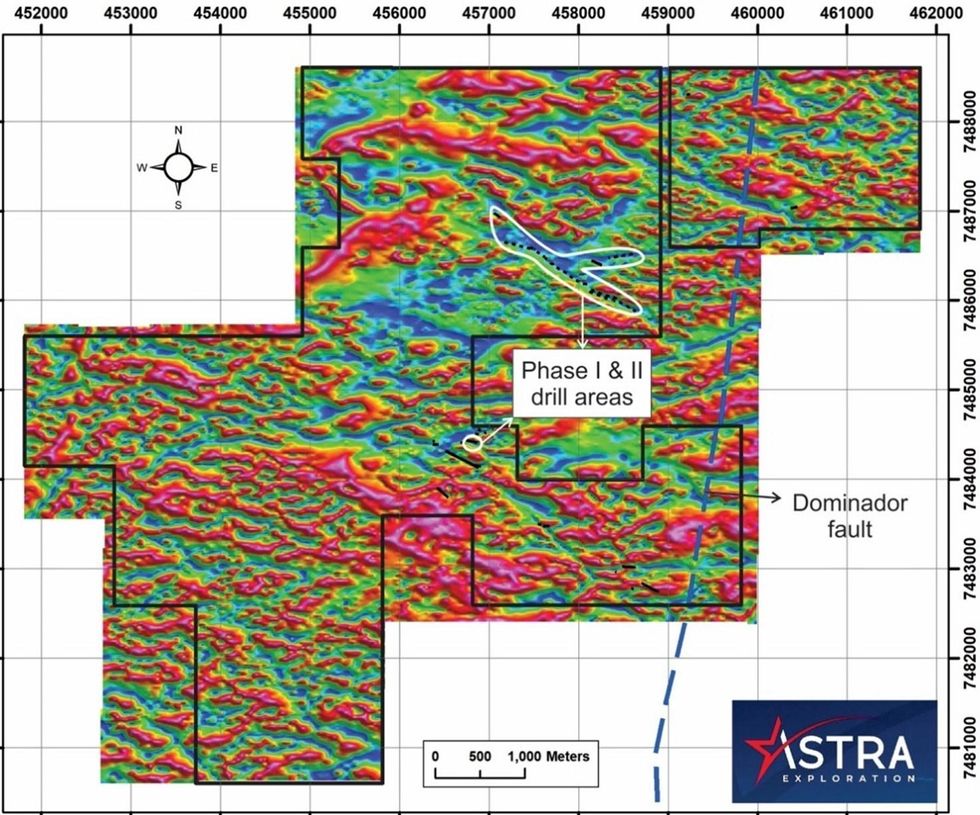 To date, Astra’s drilling has focused on a small area of the project (Figure 4) and has demonstrated that linear magnetic low features, particularly those oriented NW-SE to E-W have a high correlation with concealed vein structures. There is minimal vein outcrop in the project area, however there is widespread epithermal mineralization in surface float samples across the entire project (see February 17, 2022 news release). Company geologists continue to refine additional drill targets by integrating in-house detailed geology with the application of various geophysical techniques. This is complemented with the integrated study of hydrothermal alteration and the precipitation conditions (temperature and salinity) of the different pulses of mineralization at different depth levels of the veins. Data increasingly suggests the potential for a large-scale epithermal system with several kilometres of vein structure concealed by shallow cover.

Astra has completed property wide mapping and sampling, geophysical surveys, and localized trenching and in doing so, has defined a vein boulder field over approximately 75% of the project area. The veins do not outcrop as the majority of the project area is covered by a thin layer of gravels and caliche, but the vein float can be used to identify areas of high prospectivity. 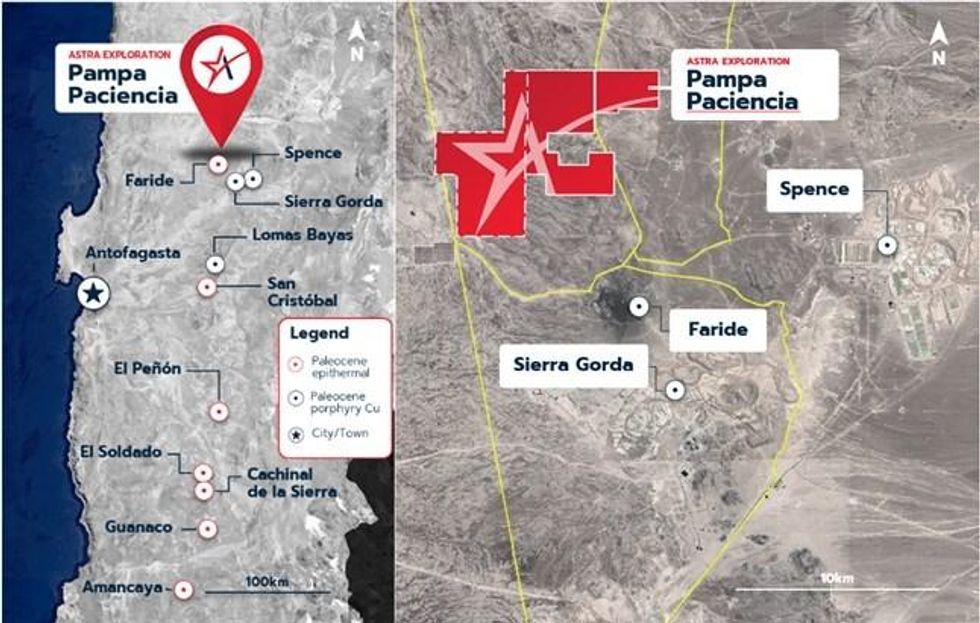 Drill samples were sampled, bagged, and tagged by Astra’s geologist and then delivered to the AAA laboratory in Calama. Samples were prepared with RC PM80 10 CM S2-150 code, and then analyzed fire assays for gold (AEF-AAS-1E42) and multi elements by ICP (ICP-AES-HF34-61). Overlimits for gold were analysed by routine AEF_GRV_1E45 and for silver by 4A-HF_AAS_1E02SL.

The technical data and information as disclosed in this report has been reviewed and approved by Darcy Marud. Mr. Marud is a Practicing Member of the Association of Professional Geoscientists of Ontario and is a qualified person as defined under the terms of National Instrument 43-101 – Standards of Disclosure for Mineral Projects.

Astra Exploration Ltd. is an exploration company based out of Vancouver, BC. Astra is engaged in the acquisition, exploration, and development of epithermal gold-silver properties in Chile and is building a portfolio of high-quality projects. Astra’s current focus is the development of the Pampa Paciencia Project.

Neither the TSXV nor its Regulation Services Provider (as that term is defined in the policies of the TSXV) accepts responsibility for the adequacy or accuracy of this release.

This news release may contain certain “Forward-Looking Statements” within the meaning of the United States Private Securities Litigation Reform Act of 1995 and applicable Canadian securities laws. When or if used in this news release, the words “anticipate”, “believe”, “estimate”, “expect”, “target, “plan”, “forecast”, “may”, “schedule” and similar words or expressions identify forward-looking statements or information. These forward-looking statements or information may relate to the Company’s business activities; exploration on the Company’s properties; and marketing initiatives. Such statements represent the Company’s current views with respect to future events and are necessarily based upon a number of assumptions and estimates that, while considered reasonable by the Company, are inherently subject to significant business, economic, competitive, political and social risks, contingencies and uncertainties. Many factors, both known and unknown, could cause results, performance or achievements to be materially different from the results, performance or achievements that are or may be expressed or implied by such forward-looking statements. Such factors include, without limitation: development of the industry in which the Company operates; risks associated with the conduct of the Company’s business activities; risks relating to reliance on the Company’s management team and outside contractors; currency fluctuations; risks regarding the failure to generate sufficient cash flow from operations; laws and regulations governing the industry in which the Company operates; the ability of the communities in which the Company operates to manage and cope with the implications of COVID-19; the economic and financial implications of COVID-19 to the Company; operating or technical difficulties; employee relations, labour unrest or unavailability; stock market volatility; conflicts of interest among certain directors and officers; lack of liquidity for shareholders of the Company; litigation risk; and other risk factors disclosed in the Company’s public disclosure documents available on the Company’s profile at www.sedar.com. Readers are cautioned against attributing undue certainty to forward-looking statements or forward-looking information. Although the Company has attempted to identify important factors that could cause actual results to differ materially, there may be other factors that cause results not to be anticipated, estimated or intended. The Company does not intend, and does not assume any obligation, to update these forward-looking statements or information to reflect changes in assumptions or changes in circumstances or any other events affecting such statements and information other than as required by applicable laws, rules and regulations.