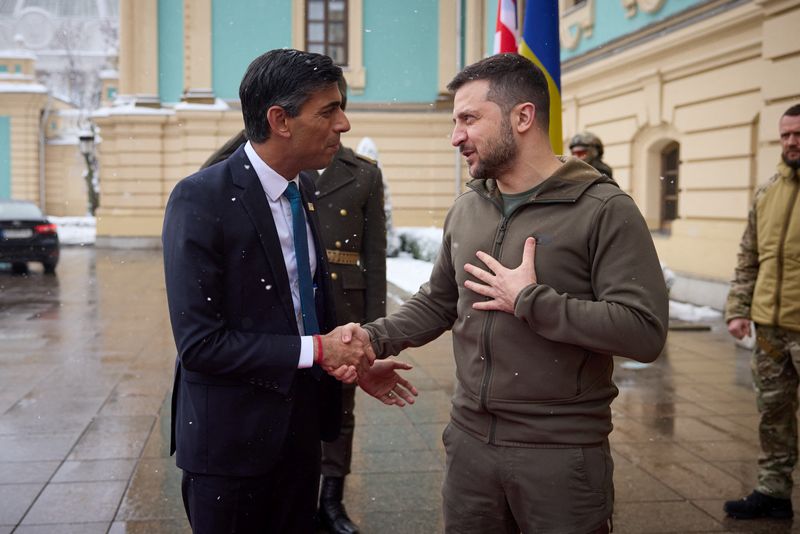 KYIV (Reuters) -Britain’s new Prime Minister Rishi Sunak made his first visit to Kyiv on Saturday, pledging to continue the firm support for Ukraine that was a focus of his predecessors, and providing a new air defence package to help shoot down Russian drones.

“Britain knows what it means to fight for freedom,” Sunak said on Twitter. “We are with you all the way.”

Sunak said in a statement that Britain would provide a new 50 million pound ($60 million) package that includes anti-aircraft guns and technology such as radar to counter drone attacks. Britain also said it would increase the training it provides to Ukraine’s armed forces.

“While Ukraine’s armed forces succeed in pushing back Russian forces on the ground, civilians are being brutally bombarded from the air,” Sunak said in his statement.

“We are today providing new air defence, including anti-aircraft guns, radar and anti-drone equipment, and stepping up humanitarian support for the cold, hard winter ahead.”

Ukrainian President Volodymyr Zelenskiy posted a video on Saturday of the two meeting in Kyiv, and he welcomed the continued support from London.

“With friends like you by our side, we are confident in our victory. Both of our nations know what it means to stand up for freedom,” Zelenskiy tweeted.

Sunak, a former finance minister, took office last month following the short-lived premiership of Liz Truss. She and her predecessor Boris Johnson had both made public support for Ukraine an important part of their agenda, a pledge that Sunak has maintained.

Russia has increasingly targeted Ukrainian energy infrastructure with long range attacks since last month, including using what Kyiv says are Iranian-made drones, for which Ukraine has sought air defences from the West.

Should We Be Cautious About The Greenbrier Companies, Inc.’s (NYSE:GBX) ROE Of 3.7%?

Penny stock trading at a discount of 31% from high declares 1:1 bonus shares