Dow Jones Vs S&P 500: Their Effects On DIA And SPY ETFs

Anyone who watches the Nightly News hears about how the market did based on how the Dow Jones or S&P 500 index did that day. For investors, indices take on greater meaning if they invest in Mutual Funds (MFs), Closed-End Funds (CEFs) or Exchange-Traded Funds (ETFs). Indices come into play in two ways. Most CEFs and MFs are actively managed. That means the managers have the discretion to pick any stock covered by their mandate, which originally was usually the entire market asset class. While not tied to any index, most measured their success against the S&P 500 index if they invested in US equities. While some MFs started being passively managed as early as 1973, it wasn’t until the 1990s when ETFs took off that there were funds available that actually invested based on an index. Today, it is common to start an index after Backtesting the concept and launching an ETF based on that index.

While most investors probably read a fund’s factsheet and visit its home page, much fewer probably do the same for the underlying index if there is one. If so, that is a potentially critical oversight as the fund’s prospectus probably just mentions the index used without going into the details of how it is built or maintained. One purpose of this article is to cover why every investor should be also doing due diligence on the index too.

Equity markets are at record levels. US equities largest drawdown in 2021 is around 4%. It has been a year since they have seen a 10% correction. Knowing the risks your index-based ETFs have because of the market exposure is more critical now to understand and evaluate. If asked, I would give a Bullish rating to Index Analysis/Review.

Active or Passive Investing: Which is better?

Before we get to the index comparison, the above question should be addressed. With data showing up to 80% of funds failing to beat their benchmark, having at least part of your portfolio on auto-piloted index-based funds seems to make sense. Of course, the ability to “beat the benchmark” varies according to the market. When I worked for a pension manager, they moved from passive strategies to active ones based on factors that indicated that Alpha was available by taking on the added risk of going “active”.

Here are some common thoughts on this topic:

Why it matters to know the Index?

There are over 5,000 (that’s not a typo) indices based on some part of the US equity or fixed income markets. There are broad indices like those discussed here, down to sub-industry ones. With so many to pick from, here are some questions to answer when doing due diligence on the index:

Most times when I search on the index name, I find a home page that has a Methodology PDF that explains all the rules used by that index. This document is a “must read” before buying index-based funds, otherwise investors might find themselves owning stocks and saying “What?”. Even so, most fund documents have a “80% clause”, giving the fund the ability to own anything within reason up to 20% of the assets not being in the index.

DJIA or S&P 500: Comparing the Indices

I chose these two indices as their makeup differs the most and stocks are not restricted by the exchange they trade on as the NASDAQ indices are.

The Dow Jones Industrial Average (DJIA) was the second index started by Charles Dow, a WSJ editor, and his statistician business associate, Edward Jones. The first was the Dow Jones Transportation Average, as railroads were the major factor in the US economy in the 1890s. The original DJIA had only 12 stocks. It wasn’t until 1928 that the DJIA expanded to 30. Since its start, components have changed over fifty times. The last change was 8/21/20 when three stocks were replaced.

A unique feature of the DJIA is the fact that it is a price-weighted index, a legacy from the pre-computer days when it started.

For more on the history on the DJIA, click here. For details into the calculation methodology, click here.

The S&P 500 Index (S&P) is widely regarded as the best single gauge of large-cap U.S. equities. The index includes 500 leading companies and covers approximately 80% of available market capitalization. This index started in 1957 and probably has more assets indexed to it than any other index. According to our Annual Survey of Assets, an estimated USD 13.5 trillion is indexed or benchmarked to the index, with indexed assets comprising approximately USD 5.4 trillion of this total (as of Dec. 31, 2020). Like almost every index other than the DJIA, it is market-cap weighted, and thus dominated by the super large Tech stocks.

Besides the price-basis of the DJIA, another criticism of that index compared to the S&P 500 is the number, or lack thereof, of stocks in the DJIA. Here is an overview of the differences in the two indices: 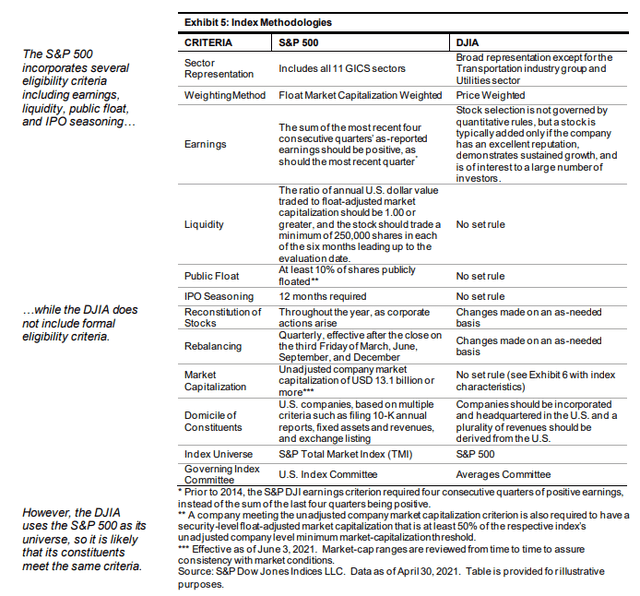 Note that the starting universe for the DJIA is the S&P 500. The DJIA will never include Transportation or Utility stocks since they have their own Dow Jones indices. While not excluded, the Real Estate sector is not represented and unlikely to be. 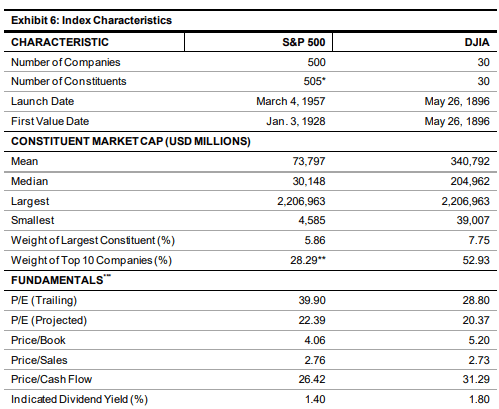 The Index characteristics do not give a clear view as to the better choice in this author’s view. The DJIA is 100% Large-Cap stocks whereas the S&P 500 has about 16% in Mid- and Small-Cap stocks. As one would expect, DJIA’s performance is almost twice as tied to how the Top 10 perform than its counterpart. The fundamentals seem evenly split between the two indices.

I imagine there might be another price-weighted index out there considering there are over 5,000 in existence. That design leads to several concerns:

The concern is with what defines them, the market-cap weighting. When Tesla entered the S&P 500, it became 1.6% of the index though only .2% of the stock is owned. The top 10 will denominate the index and, in the case of the S&P 500, the Top 10 have as much index weight as all of the bottom 420 combined!

Comparing the ETFs: DIA vs SPY

Now let’s review how the two ETFs differ because of the index they are based on. While there are a variety of ETFs based on the S&P 500 index, only SPDR Dow Jones Industrial Average ETF (DIA) uses the DJIA as its index of choice. I choose to use the SPDR S&P 500 Trust ETF (SPY) as proxy for the S&P 500 Index since they are both “Spiders”. Both ETFs are covered often on Seeking Alpha in detail. Here I will highlight some comparisons between the two ETFs caused by their choice of the index to invest against.

Index driven differences to the ETFs

First, the indices have some wide sector variations. Here is how the sector weights differ between DIA and SPY. 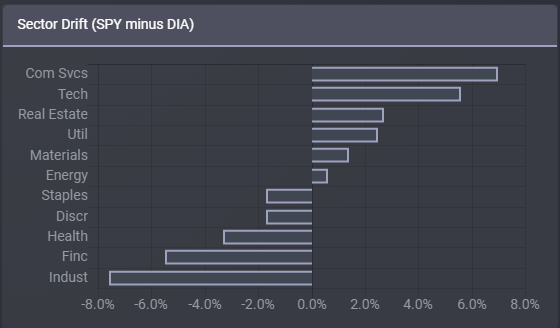 More important than the number of stocks, investor concern should be the sector differences between the two ETFs. Four sectors vary by more than 4% each. Sector performance differs as the economy goes through its cycle. While the above data is current, historical performance data for each index which pre-dates either ETF shows the two indices do not move in sync. 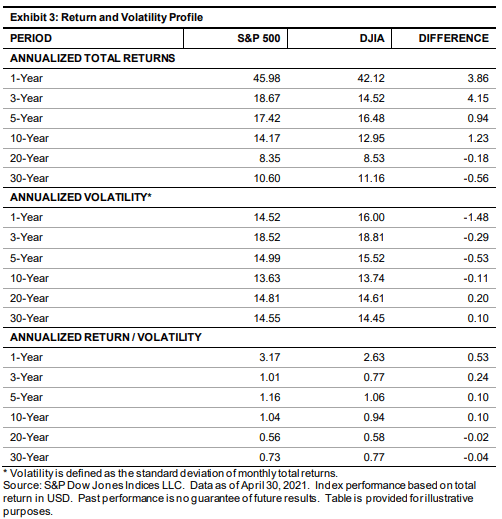 Over the last 20 years, the S&P 500 has better returns, but at 30 years, the DJIA is ahead. In more recent times, the S&P 500 has also shown less volatility. The indices have provided wide differences in returns during short periods. It would be great to figure out how to capture this variation in advance. 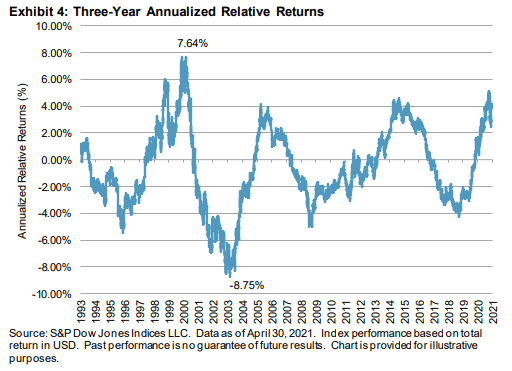 While neither ETF is for income seekers, DIA consistently yielded more to investors. The Sharpe ratio shows more of a mixed picture.

Either ETF appears to provide investors looking for Large-Cap exposure with about the same results. DIA definitely has more concentration risk than SPY and less likely to include new growth stocks like Tesla, recently added to the S&P 500 index. For investors, that shows a major difference in how the two indices are populated. The S&P 500 is more likely to include younger companies still in their big growth phrase. Only 3 companies are younger than 40 in the DJIA, with Salesforce (NYSE:CRM) being the baby (1999). That fact is an important distinction between owning DIA or SPY.

While Mid- and Small-Cap have historically outperformed their Large-Cap cousins, SPY’s 16% allocation to these stocks might explain some of the performance deviation between the two ETFs, but in the long-run hasn’t helped SPY to generate a superior return. That said, the asset-size diversity I see as a positive for SPY over DJIA.

DIA is less likely to still own old mainline manufacturing companies, having ejected giants like General Motors (GM) and General Electric (GE), but only after they collapsed. DIA owns one stock only in two sectors (Materials and Energy) showing a weakness in holding only 30 stocks. On the flip side, owning just 30 stocks means any investor can know more about what DIA owns than trying to review the 500+ stocks in SPY.

The Seeking Alpha home page for each ETF shows the above grades. Their grading system slightly favors SPY, most distinctly for Momentum. Being concerned about a market pullback, I am Neutral on both DIA and SPY at this time.

While the two Indices, thus ETFs, hold a vastly different number of holdings, the results are very close. A concern I have heard expressed about any index selected by a committee, as both are, is that there can be personal bias versus an index based on set selection rules. Even some ETFs that have such rules, if based on an index like the S&P 500 index, that becomes the starting universe, as is the case for the DJIA. As for a price-weighted index, removals and additions can have a dramatic effect if a low-priced stock is replaced by an extremely high-priced one, like Tesla, as that affects the weighting of all 30 stocks in the DJIA.

I found this link that shows how the sectors have moved within the S&P 500 up to 2019. Technology was still behind Industrials at the time, now 3x the weight.

Read More: Dow Jones Vs S&P 500: Their Effects On DIA And SPY ETFs

How Long Will This SUCKERS Rally Last?

Don’t Get Fooled by the Recent Market Rally

Sell-Side Sentiment Indicator Suggests ‘No Full Capitulation’ Yet On Wall…