Doug Kass: The Era of Irresponsible Bullishness May Soon Be Over


Thursday was an encore presentation, as, for the second time in one week, stocks collapsed.

Monday’s market schemissing was followed by yesterday’s vicious decline as the rotation from growth to value intensified as stocks took an abrupt afternoon dive.

My late December, 2021 column, “Could the Setup For 2022 Portend an End to the 12- Year Bull Return?” incorporated my specific market and sector (growth) concerns.

In this missive I exposed the risks I saw.

* The growth and narrow market performance bias into “The Nifty Seven” has grown ever more extreme, conspicuous and worrisome

* Since April 2021, over half of the S&P gain is from only five stocks

* I remain fearful of Omicron not because of its virulence but due to its likely continued impact on supply chains and, in turn, inflation

This illustration captured my concerns of a top heavy market in which a few, anointed soldiers (“The Nifty Seven”) moved ever higher when the soldiers – the rest of the market – moved ever lower, reminding us of a Bob Farrell quote, seen later in this post, about the risks associated with narrow leadership. 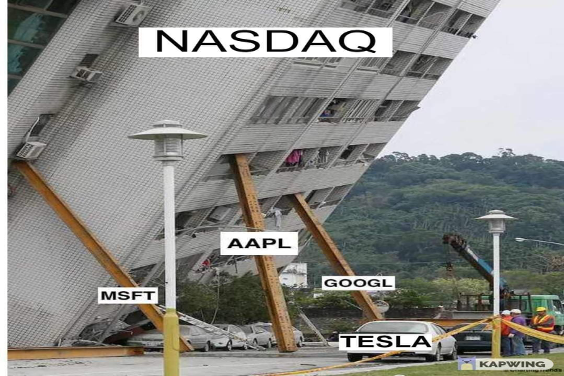 It is now clear that the first part of January has exhibited a marked change and reversal in pattern as the market leaders have fallen hard, along with the Nasdaq Index, and value stocks have begun to catch up with a vengeance.

In my mind, there was not enough time for managers to make the shift – so we are now seeing Value FOMO as investors run to buy value and to discard large-cap, technology.

But I am getting ahead of myself – so let me move back to my prior observations.

In many ways it is “different this time” for the markets.

For a number of years the Federal Reserve and central bankers around the world have priced money materially below the rate of inflation – serving to give license to investors to discount cash flows to heady multiples. As a result, the S&P Index has advanced at a compounded +23.5% annual rate over the last three years.

This week we got a taste of what might be in our investment future as the markets were surprised to learn that the Fed is considering not merely ending QE but shrinking its balance sheet as soon as this year. Earlier this week, this revelation contained in the Fed minutes resulted in a swift and considerable decline in both equities, with the most speculatively priced Nasdaq stocks suffering the most acute damage and bonds.

The movie was played again yesterday.

Last week the long bond suffered its worst calendar week total return in nearly 50 years – declining in price (and rising in yield) for five consecutive sessions – losing over 9% of value. If that -9.3% loss was seen as a year if would be the fifth worst year in five decades: 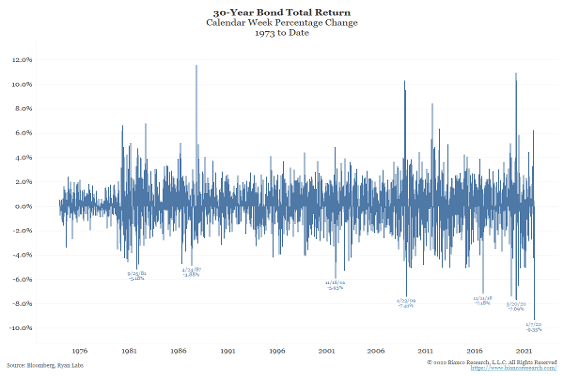 Three years ago inflation was quiescent. By every measure inflation is now raging far above the Fed’s targets and it is hurting those that can least afford rising prices. Despite turning its tail in early 2019 after the sharp 4Q2018 equity market selloff, the Fed faces more formidable political and economic obstacles today to supporting stocks.

Inflation hurts the most vulnerable political constituencies and, with far more emphasis on “equity”, the politics of 2022 is also different than at any time in prior years. The political optics of the Fed lifting stocks again while inflation is spiking the price of food, energy and housing for most people are very unattractive. In the current political environment, the resistance to anything perceived as another bailout of the 1% may be more significant than most people appreciate.

The Great Rotation Out of Growth

“Markets are strongest when they are broad and weakest when they narrow to a handful of blue-chip names.”
– Bob Farrell’s Ten Rules on Investing

In my writings I anticipate and attempt to write about where the puck is going and not where it has been.

This quick rise in interest rates will also likely have a continued negative impact on all the segments of the market – especially growth stocks – by raising the risk free cost of capital and by reducing the present value of their earnings.

Modestly rising interest rates in the second half of last year had already begun to take the wind out of the most speculative stocks whose hopes for earnings was way out in the future.

The following chart that shows the high percentage of Nasdaq stocks trading at least 50% below their recent highs: 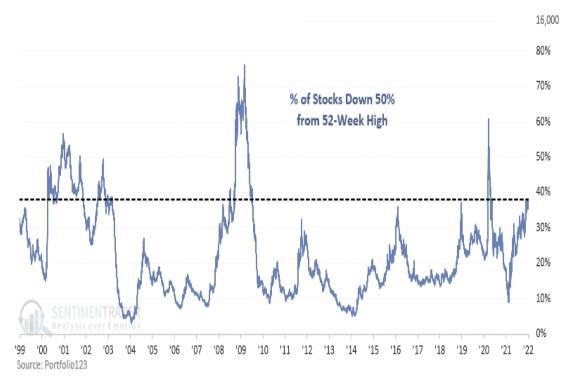 For months I have warned about the dangers of narrowing market leadership, noting that the markets have been buoyed by the performance of a handful of stocks – most notably Meta (FB) , Apple (AAPL) , Alphabet (GOOGL) , Nvidia (NVDA) and Microsoft (MSFT) – while many other “value” stocks and the rest of the market continued to trend lower.

With rates rising, I view the largest technology companies, which have a meaningful market weighting, and have up to recently been only modestly impacted, likely to suffer much more in the months ahead.

I have and continue to be of the view that the general market optimism and elevated valuations in the face of numerous fundamental headwinds are not justified. Moreover, we believe that the market’s extreme bifurcation – so conspicuous in the last several years – will, in the fullness of time, exert negative market consequences. Indeed, the damage over the last week to the former growth leaders may be the beginning of an extended period of market weakness.

While valuations and sentiment are not very good timing tools, I have spent a lot of time chronicling and discussing how we are in the 95th to 100th percentile in stock market valuations – Shiller’s CAPE, total market cap/GDP, etc.

To me, the following chart – S&P price to sales, which cannot be manipulated by adjustments – highlights the degree of overvaluation present today: 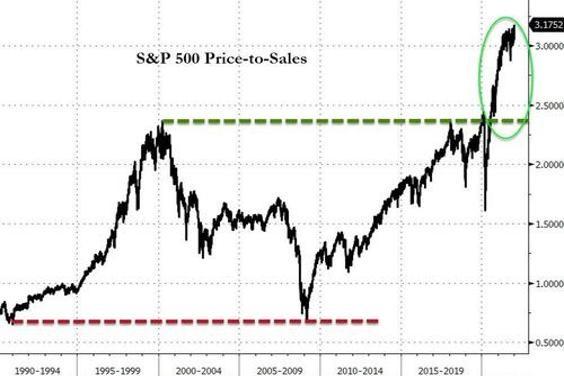 The Era of Irresponsible Bullishness May Soon Be Over

2021 began with a marriage of fiscal and monetary policies the likes of which the world has never seen and as the year ends with a failed Build Back Better Bill and a central bank that is quickly getting out of the bond buying business.

While there is always a possibility that our concerns may wane in impact – producing more positive market and economic outcomes – we remain doubtful, as we would attach a growing probability that economic growth will slow relative to expectations and that inflationary pressures will continue in the face of supply dislocations influenced in large measure by country and business restrictions. This will likely serve to produce disappointing corporate profits.

Putting aside rate hikes, the Fed is ending a $1.44 trillion quantitative easing program in the next three months. That is more than QE1 and QE2 combined and is 40% above the size of QE3. This liquidity faucet is being turned off at the same time the European Central Bank is ending its pandemic emergency purchase program (PEPP). BoE is over, BoC is over and QE from the Reserve Bank of Australia might end in a few months.

With rates hugging the zero bound, the Federal Reserve’s monetary pivot will likely prove problematic to the markets as it now has novel constraints with persistent inflation.

That excess in time and amount of policy has put us in a bind by:

* Stoking a dangerous asset bubble fueled by the liquidity of policy

As I have previously written in my Diary, the only certainty is the lack of certainty, so developing a set of baseline assumptions and conclusions for 2022 is as hard as it has ever been. But I will take a shot at it and offer my views of what may be in store.

This is the most important part of today’s opener:

I ended my “Portend” column two weeks ago with the following:

Most importantly, fiscal and monetary policy is no longer unbounded and we are likely well past the points of peak economic activity and peak liquidity.

With monetary policy pivoting and the Fed now prioritizing their inflation battle, interest rates will continue to rise – placing pressure on equities, in general and on long duration growth stocks, in particular.

After three years of compounded annual performance of about +23%-24%/year in the averages, a combination of political considerations and well-placed concerns about inflation will likely push the Fed to be far more hawkish than the consensus expects.

I view January’s drop in stocks as a possible precursor to the remainder of 2022. If I am correct in view, this would likely result in a new regime of heightened volatility in both the stock and bond markets.

“Irresponsible bullishness” may be over, and the narrowness of the market’s advance (which buoyed the Indices) likely approached an extreme ten days ago… just as financial conditions tighten.

Tread carefully as cash is king.

TINA (“there is no alternative”), meet CITA (“cash is the alternative“).

(AAPL, GOOGL, NVDA, and MSFT are holdings in the Action Alerts PLUS member club. Want to be alerted before AAP buys or sells these stocks? Learn more now.)

(This commentary originally appeared on Real Money Pro on January 14. Click here to learn about this dynamic market information service for active traders and to receive Doug Kass’s Daily Diary and columns from Paul Price, Bret Jensen and others.)

Get an email alert each time I write an article for Real Money. Click the “+Follow” next to my byline to this article.

Read More: Doug Kass: The Era of Irresponsible Bullishness May Soon Be Over

India is a true bright spot in the midst of a global downturn: Top execs

Donald Trump’s return to Facebook could be major fundraising boost

Trump’s return to Facebook could be major fundraising boost

When health(care) comes at a high price

Cipla Q3 Results: Net profit rises 10% but fails to keep up with analysts’…

From Iraqi oilfields to Tory HQ: how Nadhim Zahawi mixed business and politics