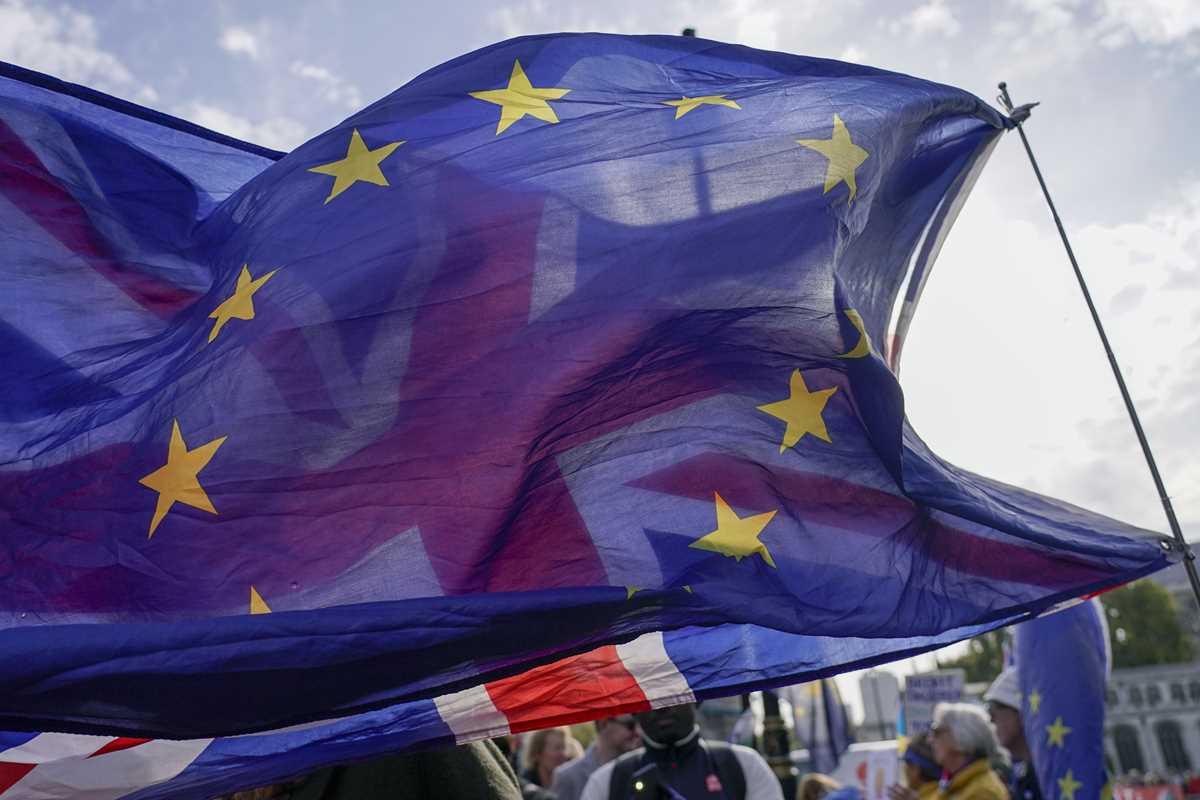 A Union flag waves behind a European Union flag, outside the Houses of Parliament, in London, Wednesday, Oct. 19, 2022. The British government on Sunday, Nov. 20, 2022 denied a report it is seeking a “Swiss-style” relationship with the European Union that would remove many of the economic barriers erected by Brexit — even as it tries to repair ties with the bloc after years of acrimony. (AP Photo/Alberto Pezzali, File)

LONDON (AP) — The British government on Sunday denied a report that it is seeking a “Swiss-style” relationship with the European Union that would remove many of the economic barriers erected by Brexit — even as it tries to improve ties with the bloc after years of acrimony.

Health Secretary Steve Barclay told Sky News “I don’t recognize” the Sunday Times report, insisting the U.K. was still determined to “use the Brexit freedoms we have” by diverging from the EU’s rules in key areas.

Switzerland has a close economic relationship with the 27-nation EU in return for accepting the bloc’s rules and paying into its coffers.

The U.K. government said “Brexit means we will never again have to accept a relationship with Europe that would see a return to freedom of movement, unnecessary payments to the European Union or jeopardize the full benefit of trade deals we are now able to strike around the world.”

But despite the denials, the new Conservative government led by Prime Minister Rishi Sunak wants to restore relations with the EU, acknowledging that Brexit has brought an economic cost for Britain. Treasury chief Jeremy Hunt last week expressed optimism that trade barriers between the U.K. and the EU would be removed in the coming years.

The shift comes as public opposition grows to the hard form of Brexit pursued by successive Conservative governments since British voters opted by a 52%-48% margin to leave the bloc in a 2016 referendum.

Now, according to polling expert John Curtice, 57% of people would vote to rejoin the bloc and 43% to stay out.

When the U.K. was negotiating its divorce from the EU, Conservative governments under Prime Ministers Theresa May and her successor Boris Johnson ruled out remaining inside the EU’s borderless single market or its tariff-free customs union. Politicians who wanted closer ties were ignored or pushed aside.

The divorce deal struck by the two sides in 2020 has brought customs checks and other border hurdles for goods, and passport checks and other annoyances for travelers. Britons can no longer live and work freely across Europe, and EU citizens can’t move to the U.K. at will.

The British government’s fiscal watchdog, the Office for Budget Responsibility, said last week that leaving the EU has had “a significant adverse effect on U.K. trade.”

Yet only recently have members of the government begun acknowledging Brexit’s downsides. Hunt, who last week announced a 55 billion-pound ($65 billion) package of tax increases and spending cuts to shore up an economy battered by soaring inflation, acknowledged Brexit had caused “trade barriers” with the U.K.’s nearest neighbors.

“Unfettered trade with our neighbors is very beneficial to growth,” he told the BBC, and predicted that the “vast majority” of barriers would be removed – although it would take years.

Any move to rebuild ties with the EU will face opposition from the powerful euroskeptic wing of the Conservative Party. Even the opposition Labour Party — reluctant to reopen a debate that split the country in half and poisoned politics — says it won’t seek to rejoin the bloc, or even the EU’s single market, if it takes power after the next election.

Sunak, who took office last month, is a long-time Brexit supporter, but also a pragmatist who has made repairing the economy his top priority. Russia’s invasion of Ukraine, which has rocked European security and sent energy prices soaring, has put Brexit squabbles into perspective for politicians on both sides of the English Channel.

Sunak wants to solve a festering feud with the EU over trade rules that have caused a political crisis in Northern Ireland, the only part of the U.K. that shares a border with an EU member nation. When Britain left the bloc, the two sides agreed to keep the Irish border free of customs posts and other checks because an open border is a key pillar of the peace process that ended 30 years of violence in Northern Ireland.

Instead, there are checks on some goods entering Northern Ireland from the rest of the U.K. That angered pro-British unionist politicians, who say the new checks undermine Northern Ireland’s place in the United Kingdom. They are boycotting Belfast’s power-sharing government, leaving Northern Ireland without a functioning administration.

The U.K. government is pinning its hopes on striking a deal with the EU that would ease the checks and coax Northern Ireland’s unionists back into the government.

Months of talks when Johnson was in office proved fruitless, but the mood has improved since Sunak took over, though as yet there has been no breakthrough. ___

2022 is nearly in the books, and for many investors turning the page to a new year can’t come soon enough. Will 2023 be better for stocks? If history is a guide it will be.

In the 12 months following mid-term elections (the elections held in the middle of a president’s four-year term), stocks have performed well. This is typically because mid-term elections tend not to go well for the party that sits in the White House.

The reasons for that trend are not something that’s in our wheelhouse. We’re just looking at what it means for stocks. And what it suggests is that next year the markets could see a strong recovery…at some point. But as is frequently the case, you have to be in the right stocks.

That’s the focus of this special presentation. We’re taking a look at seven stocks that have a strong case to be made for growth in the coming year. And some of these stocks are offering a good entry point for investors right now.