A UK budget and trouble in crypto land By Reuters 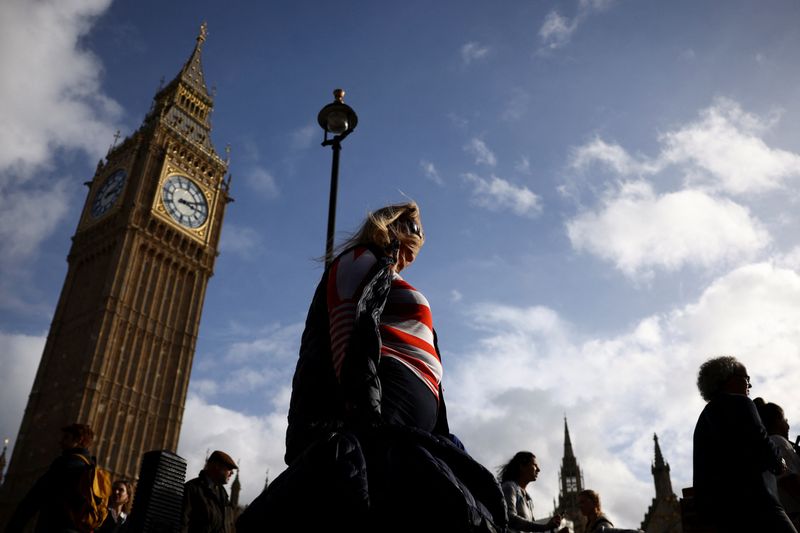 LONDON (Reuters) – The long-awaited UK fiscal plan is (almost) here and after the ructions unleashed by September’s mini-budget, markets are paying close attention.

Chaos reigns in cryptoland as trouble at cryptocurrency exchange FTX resonates, while latest U.S. and China data comes just as hopes of a peak in interest rates grows.

Here’s a look at the week ahead in markets from Elizabeth Howcroft, Tom Wilson, Amanda Cooper and Mike Dolan in London, Vidya Ranganathan in Singapore and Ira Iosebashvili in New York.

The moment sterling traders have been waiting for is almost here. On Nov. 17, finance minister Jeremy Hunt unveils the government’s fiscal plan.

September’s mini-budget from predecessor Kwasi Kwarteng brought the pound to its knees and forced the Bank of England to intervene to stem a rout in the bond market.

Hunt has since junked most of that plan, and signalled some 60 billion pounds ($68.70 billion) in tax rises and spending cuts are coming to plug a gaping hole in the public finances.

UK markets have recouped most of the maxi-losses from the mini-budget, but the outlook is grim. The economy faces its longest recession in a century, as a cost-of-living crisis bites.

Latest inflation and jobs numbers are also on the calendar. Inflation hit a blistering 10.1% in September and there’s little reason to expect much of a respite.

The crypto world has been thrown into fresh chaos by a meltdown at FTX, with the fallout reverberating across other exchanges and parts of the crypto universe.

A proposed rescue deal from rival exchange Binance fell through on Wednesday, sending top cryptocurrency bitcoin below $16,000 for the first time since late 2020.

Crypto investors are in a state of shock – FTX founder Bankman-Fried was seen by many as the “poster child” of the industry. Investors crypto markets have already taken a beating this year as central banks reverse pandemic-era monetary policy. Concerns are also rising about the future of the crypto industry, which faces an uphill task of regaining favour among retail investors.

GRAPHIC: Tech in the red https://graphics.reuters.com/GLOBAL-MARKETS/THEMES/klpygearxpg/chart.png

After warnings about online advertising and streaming services littered the third quarter earnings season, mass layoffs are now emerging. Meta Platforms just announced it would cut more than 11,000 jobs, or 13% of its workforce.

That’s among the biggest this year and follows job cuts at other tech firms including Elon Musk-owned Twitter, Microsoft (NASDAQ:), and Snap (NYSE:). Big banks too are starting to pare back staffing levels.

Markets are watching closely to see if others follow – and try to gauge whether this is merely retrenchment from over-exuberant, pandemic-distorted staffing levels or the thin end of the wedge that deepens any oncoming recession. Central banks will be watching like hawks too.

Wednesday’s U.S. October retail sales should provide markets with a sense of how consumers are faring ahead of the key holiday shopping season.

And remember the Federal Reserve is intent on hiking interest rates to contain hot inflation, even if that means a squeeze on consumption in the process.

September data showed a measure of underlying retail sales rising thanks to strong wage gains and savings, even as the broader number came in flat. Analysts polled by Reuters expect a 0.8% increase for October.

The good-news-is-bad news crowd would likely see a strong number as evidence that the Fed has more work to do in cooling the economy. That outlook is unlikely to bring joy to markets battered by expectations of more monetary policy tightening this year.

GRAPHIC: Retail sales in the US https://graphics.reuters.com/GLOBAL-MARKETS/THEMES/lgvdkmdgypo/chart.png

Chinese shares are celebrating Beijing easing some of its draconian COVID rules, including shortening quarantines by two days for close contacts of infected people and for inbound travellers. This comes despite cases on the mainland at 6-month highs and some big cities under fresh lockdowns.

Upcoming data will be a rude reminder of the toll the strict COVID policy has been taking: retail sales are falling, industrial production has been hurt by strict lockdowns during last month’s 20th Party Congress, and property sales are in an extended decline.

The glass-half full view sees green shoots in promises the authorities have made on growth and hopes for more policy support. One test is whether China’s central bank renews a massive trillion yuan in medium term loans to banks, maturing on Tuesday.

Meanwhile, Chinese leader Xi Jinping arrived on the Indonesian island of Bali on Monday for a long-awaited meeting with U.S. President Joe Biden, ahead of a Group of 20 summit set to be fraught with tension over Russia’s invasion of Ukraine.

Read More: A UK budget and trouble in crypto land By Reuters

Why Is Clovis Oncology (CLVS) Stock Down 72% Today?