This article is excerpted from Tom Yeung’s Moonshot Investor newsletter. To make sure you don’t miss any of Tom’s potential 100x picks, subscribe to his mailing list here.

The “Everything Bubble” Continues to Deflate

The past week has been a catastrophe for any liquidity-dependent asset class. Bitcoin (CCC:BTC-USD) is down to $40,000, and 5-year Treasury yields are at their highest point since before the pandemic started.

That’s why I’m not buying the Bitcoin dip. The last time rates rose in 2018, BTC would suffer a “nuclear-winter” loss of more than 80%.

But the disorganized rout has also created buying opportunities for some promising cryptos. Today, we’ll take a look at some of these “buy-the-dip” coins.

The Two “E-Coins” Of CryptoLand

Investors looking to keep some crypto exposure now have the opportunity to buy up two “E”-named coins on my list: Ethereum (CCC:ETH-USD) and Enjin (CCC:ENJ-USD).

My No. 3 pick of 2022 hasn’t been immune to the crypto pullback. Prices are down 17% year-to-date, marking its worst start to the year ever.

Still, the price collapse has created an unusual opportunity to get in on a good bet.

“If you roll the clock forward 10 to 20 years, a very sizable percent, maybe even north of 50%, of the world’s financial transactions in some way, shape or form will touch Ethereum,” noted Joey Krug, co-chief investment officer of crypto hedge fund Pantera Capital. “There’s too many trade-offs other chains are making that Ethereum is not making on the decentralization side that are pretty important.”

Ethereum’s move to an energy-efficient Proof of Stake (PoS) protocol will also open the door to staking. Crypto exchange Kraken estimates that rewards will hover between 4% – 7% return, creating an incentive for institutions and individuals to buy and hold ETH.

Enjin has two advantages that most competitors lack:

Since its release in 2018, Enjin Coin has built itself into a significant player in NFT platforms by helping businesses launch products. The “NFTs for Everyone” token now counts Microsoft (NASDAQ:MSFT) and Lost Relics as customers.

The reason for its success is simple: Corporations need help with blockchain. Firms like Microsoft might know their way around operating systems and cloud computing… but they’re novices when it comes to NFTs.

And it’s often easier to pay an expert.

That’s the reason why enterprise software firms from ADP (NASDAQ:ADP) to Hedera Hashgraph (CCC:HBAR-USD) exist. There’s no reason to build payroll software (or blockchains) if you can buy it for a fraction of the cost.

But as one of the few tokens to have a B2B business development team, Enjin Coin is the one I’d think of buying.

The “B-Rated” Cryptos to Sell

On the other side of the… um… coin… we’re only two weeks into 2022, and the warnings from 2021 are already playing out. Bitcoin prices are down 40% from their peak, and Binance Coin (CCC:BNB-USD) isn’t far behind.

“We’re in an everything bubble,” noted investor Howard Marks last August in an interview with Bloomberg News. “The stock market is high, real estate is strong… We’re in a low return world. The lowest returns the world has ever seen, prospectively.”

It was only a matter of time before my own thoughts about the Fed played out.

“The Federal Reserve has pumped over $4 trillion into the U.S. economy since the start of the Covid-19 pandemic, 65% more than the total market cap of all cryptocurrencies. Without that liquidity, cryptocurrencies will begin to stall.”
— Moonshot Investor, October 2021 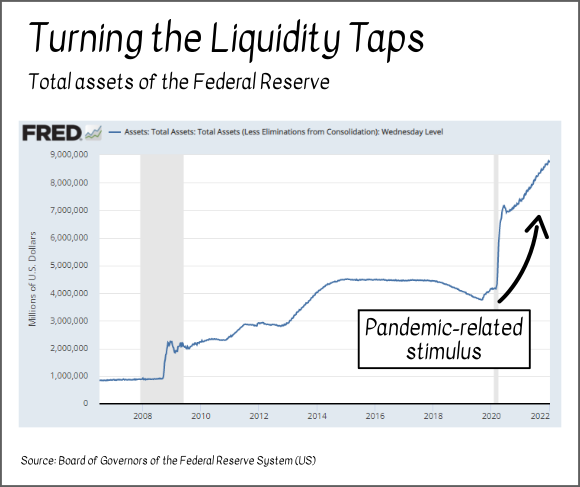 But of course, such warnings aren’t particularly useful unless they come with actionable advice.

Here’s mine: sell the two “B” coins (Bitcoin and Binance) if you haven’t already.

I’ve never been a fan of Bitcoin, an energy-intensive cryptocurrency without any plans to improve. The coin’s average transaction time clocks in at 10 minutes (making it impractical for day-to-day use) and its miners consume more energy than the country of Argentina.

That’s because Bitcoin’s improvements are ratified the same way that its coins get mined:

It turns out that 95% of miners must approve every Bitcoin upgrade, making it virtually impossible to improve the coin’s efficiency. Want to move to an energy-efficient Proof of Stake (PoS) protocol? Or create lower transaction fees?

Forget it. No miner would vote for a change that reduces (or eliminates) the value of their billion-dollar mining rigs.

The stubbornness will end up costing Bitcoin. Ethereum has already launched a proof of stake protocol, and centralized entities like Hedera Hashgraph push upgrades monthly.

Even if Bitcoin prices eventually recover from the Fed-created slump, its technological edge probably won’t.

On the other end of the spectrum is Binance Coin, a centralized cryptocurrency governed by a Cayman Island-based firm. From a technological standpoint, it’s as far from Bitcoin’s decentralization as you can get.

Binance Coin, however, suffers from the same demand problems that plague Bitcoin.

During good times, this demand creates a virtuous cycle. Cash-rich retail investors invest in rising Binance tokens like Safemoon (CCC:SAFEMOON-USD), causing prices to go up more, and so on.

The Fed’s stimulus last year was so stunning that I was forced to call missing Binance Coin “my biggest regret of 2021.”

“In my sweeping January review, I gave BNB two stars on account of its parent company’s checkered past. Oops. My Bad… In the end, Binance’s cheap transaction prices, coupled with light-touch regulation, spawned an entire ecosystem of meme coins”
— Moonshot Investor, December 2021

But in bad times, the wheel spins in reverse. Declining meme token prices create an exodus of cash, driving prices down further still.

Though the world’s No. 3 token won’t disappear overnight, I’d rather miss the boat again than jump in on a cyclical coin that relies on Fed liquidity.

How Much Should We Care About Macroeconomics?

“The stock market has predicted nine of the past five recessions,” Nobel-winning economist Paul Samuelson once quipped. Cry wolf for long enough, and eventually, one might appear.

Bond traders, however, have a far better record than their stock market counterparts. These investors care more about a company’s survival than its success; academic studies have shown that yield curves are strong predictors of negative performance.

That’s excellent news for deep-value companies, a topic I wrote about on Monday. Cash-generating firms are little affected by low-return environments and rising discount rates.

But zero-revenue tech companies and cryptos alike need to be careful. Because now that liquidity is slowing, investors will soon find which investments have been faking things all along.

P.S. Do you want to hear more about cryptocurrencies? Penny stocks? Options? Leave me a note at moonshots@investorplace.com or connect with me on LinkedIn and let me know what you’d like to see.

Thomas Yeung is an expert when it comes to finding fast-paced growth opportunities on Reddit. He recommended Dogecoin before it skyrocketed over 8,000%, Ripple before it flew up more than 480% and Cardano before it soared 460%. Now, in a new report, he’s naming 17 of his favorite Reddit penny stocks. Claim your FREE COPY here!

On the date of publication, Tom Yeung did not have (either directly or indirectly) any positions in the securities mentioned in this article.

Tom Yeung, CFA, is a registered investment advisor on a mission to bring simplicity to the world of investing.

$3.90 Million in Sales Expected for QuickLogic Co. (NASDAQ:QUIK) This Quarter

Shiba Hunter Coin: 14 Things to Know We Know About SHUNT as the Crypto Rockets This Week

Why Is Quince Therapeutics (NASDAQ:QNCX) Stock Up 53% Today?